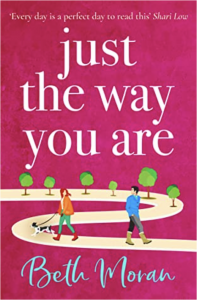 While this one had the signature charm of a Beth Moran novel (of the two I’d read before this one), and followed the same basic plot structure, it was decidedly my least favorite thus far.

First of all, 29-year old Ollie was not 100% likable. Her origin that she must leave in order to find a new life for herself, in this story, was her mum’s house. Her mum is massively codependent and hypochondriacal, and Ollie has adapted her life to allow her mum to control her–which meant that she lost her fiance years ago when he tried to tell her that her mum was making up (or psychosomatically manifesting) her chest pains in order to keep Ollie from getting married and moving away. So with the help of her best friend Steph, Ollie finally decides that, if she’s ever going to get her own life, she’ll have to do so behind her mum’s back. She buys a little cottage in another little town not too far away, gets a friend of hers to lie to and manipulate her mum into allowing the friend to move in as her new roommate, and then leaves, without telling her mum where she’s going. Then she completely cuts her off and blocks her phone number. To be fair, Moran’s depiction of Ollie’s mom truly is full-on crazy, but the way Ollie treated her mother was kind of awful.

Then she gets to her new town, and her friend Steph challenges her to complete her “bucket list” she’d written for herself when she was 16 years old, intending to complete them with her soulmate. Social worker Steph wants Ollie to learn that she doesn’t need a man to complete her–and so she gets Ollie to agree to a “no man mandate” until she’s successfully checked off every item on the list, by herself.

The “no man mandate” is immediately challenged when she meets the hot forest ranger Sam. Her intentions to become her own person are likewise challenged when she meets her 11-year old neighbor Joan, whose mother comes off kind of like a neglectful and hardened crack addict. Ollie at first worries for Joan’s well-being and considers calling CPS, but eventually she hears Joan’s mum Leanne’s story and tries to rescue them both. Steph gets after her for this, for simply substituting Joan and Leanne for her mother. Sam, meanwhile, pops up every time she turns around, Ollie learns early on that he’s off-limits (or so she thinks). He was once an engaged attorney, but that life choked him, and so he gave it all up and moved back to the tiny town where he grew up.

The progression of the story is more or less predictable, filled with likable characters as most of Moran’s books seem to be. The story affirms the importance of relationships in general, and of all kinds. It was clean, though I did notice a smattering of woke ideas and subtle political jabs which weren’t present in her previous two books. Maybe this one is just more recent, since it seems big publishers must require all that these days.

Political content: subtle but present, and scattered in quite a few places