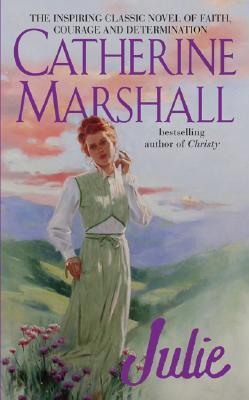 My mom read this book to me when I was little—probably in elementary school sometime. (I’d all but forgotten about Catherine Marshall until my husband mentioned a book by Peter Marshall, her husband, that we ought to read together sometime.) It’s always interesting to revisit a story I only knew as a child to see how it hits me differently as an adult. In this case I remembered nearly nothing about it, except for really one spectacular scene at the end, and a vague recollection of a love triangle (which turned out to be a love square: one girl, three guys).

The story follows 18-year old Julie Wallace during the Great Depression. Her family moves to the small town of Alderton after her father abandons his post as a pastor and instead buys the struggling Alderton newspaper. To make ends meet, her father has only one employee, and Julie eventually becomes one of the primary reporters on the paper, even though she is still in high school. The primary conflict is the fact that the low elevation Alderton community is only protected from the massive Kissawa River by a dam which is in sad need of repairs. But because of where it is situated, the dam is the sole property of the wealthy Tom MacKeever Senior, who owns a country club. MacKeever refuses to perform the needed repairs, because doing so would bankrupt him. Every time there is a heavy rain, the Alderton community tends to flood, in part because the waters of the lake are only a few feet below the top of the dam. The Wallace family’s fight against the MacKeevers is reminiscent of George Bailey’s fight against Potter in “It’s a Wonderful Life”: it’s David vs Goliath, and as the Wallaces resist, things only go from bad to worse. But the more impossible things look, the more spectacular the victory from unexpected quarters. I definitely teared up a few times.

Overall impressions: first, I’m impressed that Catherine Marshall manages to write overtly Christian fiction without making it cheesy or heavy-handed. I almost never read Christian fiction  for this reason, because ‘cheese’ almost invariably seems to be the result. I wish I knew why. Yet unlike most such stories, Julie comes off more like a tale that just happens to involve a young girl’s faith journey, but not because the author is necessarily trying to beat the reader over the head with her evangelistic message. It just is what it is, and she can’t tell the story without including that aspect of it. God is essentially both a character and an indispensable part of the story’s context. (I also happened to agree with the author’s theology, which helps.)

Also, I was surprised (and amused) by the culture Marshall describes: I guess I expected that a pastor’s wife writing about the 1930s would have a very old fashioned idea of courtship. But Julie dates and makes out with multiple men at a time (behavior that would earn her the title of “player” today), and even goes to drinking parties, though sort of on accident. But she’s far more honest and forthright with her feelings than teenagers (or really, people of nearly any age) are today. At times I thought she was so direct for an 18-year old that her character stretched belief… she should have been a little more guarded with her own feelings. But it was also sort of refreshing, and for her culture, it seemed to fit.

Julie did get off to a slower start, and while I enjoyed the story, it wasn’t extraordinarily memorable. It was uplifting, though, in a way that felt authentic. It’s the sort of book I might read again someday.