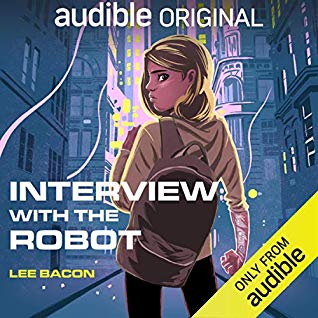 This was great! Really original. The story is told in a series of interviews between a police officer and an ostensibly 12-year old girl named Eve, though we find out pretty quickly that Eve is actually a very advanced AI. Eve explains her history in the course of the interview, but they’re told to us in flashback format. We see her history, starting out as a box with a microphone and no voice, progressing all the way to passing for human and even superhuman. She “grows up” in a laboratory called Eden (ha, see what they did there), with no one but the 12-year old son of the C.E.O. for company, as he is “home schooled” by AI tutors. Emory, the boy, has no human friends, and decides to befriend Eve. Through her interactions with him, she hones her social skills and develops empathy and emotions. We learn early on that Emory’s mother died in a car accident, and her loss seems to be a driving force for his father David.

Emory, meanwhile, longs to know what is behind one particular door to which he does not have access. He and Eve concoct a scheme to get them inside… and what they find is straight out of West World, though I don’t think it was a ripoff. There are some really great twists and turns for a story so short, and it held my interest until the very end. I also loved that the main character was an A.I., and you identified with her more than with the humans. Very unique and highly recommended!