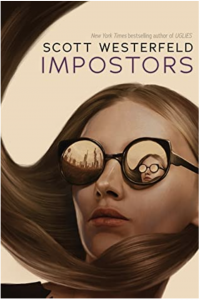 An intriguing concept, but ultimately the story devolved into the same dystopian tropes we’ve read a hundred times.

The main character is Fray, twin sister to “first daughter” Rafia, international celebrity. Only, no one knows that Rafia has a twin. Before the twins were born, their brother was kidnapped and never seen again for political reasons. Their father hates to lose and hates to be vulnerable… so as his wife lay dying, he harvested her eggs and engineered identical twin daughters. One, he raised to actually be his daughter. The other, he raised to be her body double, to take a bullet in her twin’s place if necessary. Fray was raised to kill from the time of seven, and to have no identity of her own. She’s carted out in public venues where Rafi would be at risk, and otherwise hidden in the shadows.

But when Fray is sent to a neighboring city, ostensibly to court their first son Cole (who thinks she’s her bubble-headed sister and hates her at first), her father initiates a military strike that sends her and Cole on the run to join the rebels. From this point, the story follows the usual pattern, more or less. Fray’s predicament is unusual initially, but once the war starts, it’s just a question of whose family is still alive or on the run, how they fight, how they survive, and oh, by the way, they’re also teenagers falling in love with each other too.

The story ends at a cliffhanger, but I’m not intrigued enough by the characters or the plot to keep reading.

Violence: plenty but nothing gratuitous