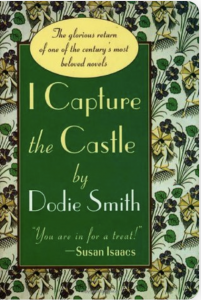 I’m almost positive I’d read this book once before, only because vague snippets came back to my remembrance as I listened, and also because it popped up in my audio library… and yet, somehow, I recalled almost none of it. This was a surprise, considering it’s exactly the type of story that should be one of my all-time favorites: set in a simpler time (though I’m unclear whether it was the 1920s-1940s… somewhere in there, I suppose, maybe I just didn’t listen closely enough) and episodic, in the style of Anne of Green Gables or Little Women. But, like Little Women, I guess it didn’t make it into the “cannon” of my favorites because the ending was so dissatisfying.

The narrator, Cassandra, is very engaging (as JK Rowling’s review noted). She’s somewhere in her early to mid-teen years, in that coming-of-age period, and she still looks like a child for the most part. She has an unusual family situation: her mother died some years earlier, but before her death, her brilliant yet apparently volatile father threatened her mother’s life and was sent to prison for it. Cassandra notes that nobody really thought her father meant it except a neighbor who overheard the threat, and was the one who turned him in. Her father was a “one-hit wonder” in the literary world before this episode, having written an apparently esoteric novel called “Jacob’s Ladder” that was later studied in universities around the globe–and yet, he’s never been able to write anything else. Because of this, the family is destitute. They moved into a dilapidated castle in England which Cassandra manages to find it romantic, but her beautiful and mercenary older sister Rose despises her poverty and is willing to sell herself into a loveless marriage to get out of it, provided her groom-to-be is wealthy. Other quirks of the family life include a servant named Steven, whom they took in when his mother died when he was a child. Cassandra, nearly his age, was kind to him, and he’s been in love with her ever since. Also, after Cassandra and Rose’s mother died (and they also have a brother named Thomas, who rarely enters the story), their father, Mortmain, remarried a young model named Topaz who doesn’t fit the role of the stepmother at all. Rose hates her, but Cassandra and Topaz are close.

Enter Simon and Neil, American brothers who happen to be their landlords. Simon is the elder, more serious brother–and because he’s the heir, Rose immediately fixates on him as her “target” for marriage. She makes herself ridiculous trying to win him over, even though she doesn’t care for him at all. Neil sees through her act and despises her for it, but eventually Simon is completely taken in. Both brothers regard Cassandra as a child–until one day, for reasons that probably only make sense within the culture of the day, Simon kisses Cassandra (apparently in a brotherly way, in his mind? Though it was on the lips) and Cassandra immediately falls head over heels in love with him–after he’s already engaged to her sister. Steven, meanwhile, pursues Cassandra with great kindness. Initially she’s a bit confused over her feelings for him, but once Simon kisses her, it’s all over. In the background of all this, Topaz and the rest of them attempt to coax and bully and coerce Mortmain into writing again, and his fragile ego can barely stand the onslaught.

The ending, as I said, was just all wrong. Based on the bent of the narrator, it was the only thing it could possibly be, but I feel like she should have had more of her own character arc so that something else could have been possible, rather than just a single-minded obsession. Nearly everyone ends up miserable, and those who don’t aren’t exactly admirable for the way they went about achieving their desires. The last line has an almost unfinished quality to it. Just thoroughly unsatisfying. No wonder I didn’t remember it.