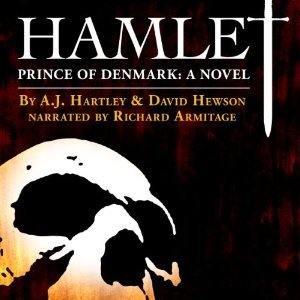 I didn’t know the story of Hamlet at all, other than the fact that there’s a famous speech in which he holds a skull. This is a retelling, not done in Shakespearean language, which makes it much easier to follow for me. I’m just not into working that hard to understand what’s going on. I’m also not usually a big fan of tragedy, but the story was just so compelling… and yet there was enough distance between me and the characters that I wasn’t really devastated by the ending.

Hamlet is the son of the old king, who was apparently murdered, and returns as a ghost to compel Hamlet to avenge him. The king’s brother now sits on the throne and wedded his queen, just months after his death. But it’s a lot more complicated than that. Turns out the old king was a complete creep, while the brother was really a good guy who genuinely loved the queen (though the king did not.) He also loved his nephew. Yet when the nephew finds out what he’s done, where will his loyalties lie? Meanwhile, there’s massive intrigue in the court: advisors convinced brother (Claudius) to do the deed for their own dastardly ends. One of the advisors is the father of Ophelia, Hamlet’s sweetheart, who ends up mixed up in the whole affair. And one central character named Yoric, Hamlet’s midget jester, serves as both his sounding board and comic relief throughout. I didn’t learn until the afterword that Yoric is mentioned by name but is never actually a character in the play! I think Shakespeare missed the boat on that one, because Yoric is my favorite. And the twist of his true identity at the end is great.

I’ve never watched Game of Thrones but I’d imagine it’s pretty similar to this, in terms of court intrigue, duels, poisonings, affairs, and murder. There’s even a fun episode in which Hamlet gets kidnapped by pirates. I recently learned that Julius Caesar was once kidnapped by pirates, too, so I wonder if that might have served for part of Shakespeare’s inspiration there? Definitely an engaging listen!

Language: present I think but it didn’t register, so probably not a lot