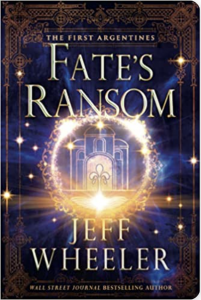 Ugh! Wow. I have strong feelings about this one, both good and bad…

I’ve invested a lot of time in Ransom, the hero of this tale, since this is the fourth and final book. On one hand, all of Wheelers’ stories tend to feel quite similar, as do his heroes… but that’s kind of what keeps me coming back. He’s one of VERY few modern authors who writes real heroes anymore. His main characters have true integrity based upon something larger and more important than themselves and their own desires. Lord Ransom serves The Fountain (God), and because of his loyalty to do the Fountain’s bidding, he also stands by his oath to serve the Argentine line, kings who wear the Hollow Crown–no matter what. This is THE defining trait which drives Ransom’s every decision. And it’s tested throughout this entire story.

This last installment opens with the death of the previous king at the hands of the almost all-powerful poisoner, Alex. With his dying breath, the Argentine king told Ransom that he wanted his brother, Jon-Landon, to be his successor. Unfortunately, Jon-Landon is evil, and Ransom and everyone else knows it. But, because Ransom has vowed to serve the Argentines and that is his king’s dying wish, he makes the king’s choice known–and feels the Fountain’s approval for it. The Hollow Crown goes to Jon-Landon, who turns out to be every bit as capricious, selfish, and wicked as everyone anticipated. He also envies Ransom, and sets him up for failure at every turn, tempting him into betrayal. But the Fountain makes it clear to Ransom that he must continue to serve Jon-Landon–not for his own sake, but for that of his son Devon. Devon must be the next king, and if they depose Jon-Landon, the entire kingdom will fall.

I so appreciated this higher perspective of what was going on in the action of the story, because it told me exactly what I could expect (in part because I’ve read so many of Wheeler’s stories now). I knew Ransom would be sorely tempted, but would stand firm and maintain his integrity, no matter the cost. I knew that because of it, even though it would look like his loyalty continued to enable a wicked regime, the Fountain saw more than he did, and his faithful service would turn out to be the only possible way forward. All Ransom had to go on was his trust in the Fountain, yet the reader knows that his trust is well-placed. I also anticipated that Wheeler would redeem even Jon-Landon: that Ransom’s goodness would prick his conscience, win his affection, and ultimately change him into a better man by the end. I was not disappointed in this.

But. BUT! About 3/4 through the book, the foreshadowing of a sad ending for Ransom started to come fast and furious. I hate sad endings, so I started to emotionally detach on purpose, but I still had to finish it (I’d come this far, after all). Then I thought, the foreshadowing is SO thick, perhaps it’ll be thwarted after all? Perhaps Wheeler is just setting us up to expect one thing, and then there will be a sudden loophole that will make everything all right? Maybe???

I knocked off a star for the emotional trauma.