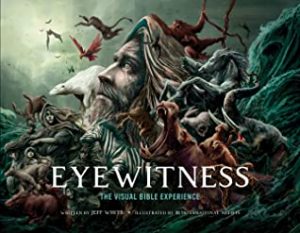 While I’m usually an audiobook or ebook kind of a girl, this is one book that needs to be experienced in hardcover, as the emphasis is really on the artwork. It’s a collection of illustrated retellings of some of the major stories in the Bible, Old and New Testament, told in first person and through the eyes of the main character. The stories are all quite short and stick to the highlights. It definitely doesn’t read like a novel, but it isn’t meant to. It’s like a children’s illustrated book, except that it’s for adults, designed to make the Bible accessible for those who might be less familiar with it, or to make it fresh for those who are.

I’m writing Biblical retellings myself (my first collection is called Messiah and focuses on just Jesus’ miracles) but aside from the hit crowdfunded series “The Chosen” (which I also learned about later), I didn’t realize that anyone else had the same idea. I’m really pretty jazzed that they are, and I particularly enjoyed reading White’s versions of the retellings I’d already written myself, since I’d spent so much in-depth time with those stories.

I love that it also contains such a breadth of artwork styles, as it was illustrated by many different international artists.

Sexual content: present but tasteful (it’s the Bible, after all)