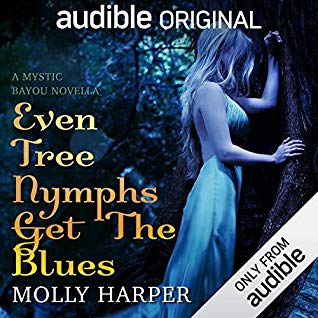 I never would have picked this book up (the title would have scared me away!) except that it was a freebie on Audible. But it was surprisingly cute, and tongue-in-cheek. The story: in a world where supernatural creatures intermingle with humans, the ageless tree nymph Ingrid keeps to herself after having her heart broken (seventy years ago). Her only real interaction in the world of humans was her role as a model for a milk company, years earlier. But now she’s moved to Mystic Bayou, Louisiana, where she plans to use her modeling earnings to open an ice cream shop.

Rob, meanwhile, fantasized about the Eidelweiss milkmaid when he was a teenager. So when he spots Ingrid on the streets of Mystic Bayou, he’s instantly smitten — but her reticence and a misunderstanding or two get in the way of their happiness. It’s a fluffy, whimsical read, and not a big time investment.