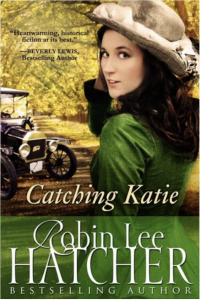 I think I picked this up on the recommendation of another author I follow. It was good as far as Christian fiction goes, and a sweet romance with a few teeth-gnashing moments that worked out all right in the end.

Katie is a women’s suffrage advocate at the turn of the century. She went off to college at a time when almost no women did so, and bought one of the first automobiles, though it’s always breaking down. She grew up with Ben Rafferty, her best friend, but she hadn’t seen him in four years because she was so far away and travel wasn’t easy back then. It was unclear why she felt “called” by God to go back to her small hometown when she loved the big cities so much and never intended to remain in the town she grew up in, but she did go back, intending to spread her message of the importance of suffrage. Ben, stunned that she grew up to be so beautiful, fell in love with her quickly given that and their shared history. But he knew Katie had no intention of ever marrying, dedicated to her cause and believing that marriage and family were incompatible with it, for a woman. For her part, Katie saw the change in her old friend and fell for him too, jealous of the woman he’d been rumored to be courting. For about the first half of the book, the tension is split between the hornet’s nest Katie stirs with her radical ideas and her passionate and less than tactful means of expressing it, and the romantic tension between her and Ben.

Meanwhile, there’s an interesting old schoolmarm character named Blanche who seems to be a feminist, but really she’s just bitter against men and over the way her life has turned out. She at first is all about Katie, but then grows jealous of her and bitter over the fact that she doesn’t eschew all men, as Blanche believes she should if she were truly dedicated to her cause. Blanche’s bitterness becomes hatred over the course of the story… which leads to an interesting but compelling twist ending that I wasn’t expecting in a story like this.

There’s one segment toward the end of the book that almost made me quit reading, because I was so sure it would turn out a particular way and I knew it was going to make me angry. While overly feminist books irritate me on one hand, many Christian books tend to err on the other side, making it seem like a woman’s place is primarily at home with her children, and she should subjugate all other desires to that. I thought it was going there… but it didn’t. It actually ended perfectly, and exactly the way I hoped it would.