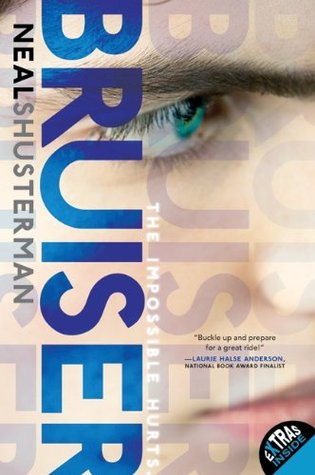 Such an interesting concept. I picked this one up because I really enjoyed the Scythe trilogy, and I am now even more impressed with Neal Shusterman’s creativity.

I almost didn’t finish the book, because the beginning led me to believe this would just be another high school drama. I’m so glad I kept going, though–I’ve never read anything like this before. It’s a story of a supernatural micropower, and that is the one point at which the reader must suspend his disbelief.

Tennyson (named for the poet) is upset and angry that his twin sister Bronte (named for the writers) is dating a ne’er do well outcast, Brewster, nicknamed “the Bruiser”–ironic, because he’s never actually hurt anybody. Tenny is the one with the reputation of a bully. Brew looks the part of a bully, though, and because he’s also a brooding loner, the class voted him “most likely to end up on death row” behind his back.

But he’s a loner for good reason. Brewster was born with a gift that’s more like a curse: he takes on the pain of those he cares about, both physical and emotional. His isolation is really protection, because once he cares for someone, he has little choice in the matter, nor do they–or so we’re led to believe at first. I kept thinking that Brew was like a reimagining of Jesus, taking all our sickness and pain on the cross–except that Brewster does it all the time, and he doesn’t have any sort of supernatural capacity himself. He’s just this poor kid, doomed to break under the weight of the world while everyone around him gets off scot-free. Once those around him learn what he can do for them, they become selfish, manipulative monsters. He never seems to resent anyone for it, but he also has no concept of boundaries, no idea how to protect himself. Only once does he manage to refuse someone else’s pain, because it would result in his death in his abusive uncle’s place. But he’s riddled with guilt about it afterwards.

I was wondering how such a book could possibly end. But without spoilers, I’ll say the key does in fact lie in boundaries. We are (biblically speaking) to carry one another’s burdens, BUT each is also to carry his own load (two different words in the Greek, Galatians 6:2-5). This isn’t a Christian book by any means, but it illustrates the biblical concept well. Brew cannot protect himself, so it’s up to Bronte and Tennyson to learn how to carry their own loads, rather than allowing Brew to be the human receptacle for all their junk. But they’re only motivated to do this once Brew’s life is on the line. It’s such a fascinating glimpse into human nature.

My rating: ****1/2
Sexual content: none
Language: some I think, but it didn’t register so not a lot
Political content: none
Violence: there’s some child abuse, but it doesn’t go into a lot of detail