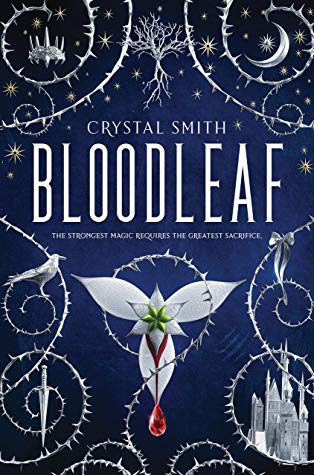 The story follows Princess Aurelia, engaged to marry a prince whom she’s corresponded with but never met. She’s a witch, in a world that condemns witches to death, and so her hold on the people is tenuous despite her royal position. Three of the people who love her best, including her mother and her guard and best friend who is in love with her, participate in blood magic at the beginning of the story, binding their lives to hers such that if someone kills her, one of them will die in her place. She allows this I guess because she is the princess and they want her to live to unite two kingdoms with her marriage, but it still seemed incredibly selfish to me for her to permit this. Anyway, one thing leads to another, a royal advisor double-crosses her and sets up her best friend in her place, and she’s on the run. She sees this ghost who’s haunted her most of her life, and she calls her the Harbinger because when she appears, it’s because someone is about to die. She thinks her guard dies but of course he doesn’t really–and while I thought he was going to turn out to be the love interest early on, it turns out she really doesn’t love him back. In her escapades she meets a series of characters, one of whom becomes the real love interest. She meets a series of characters who don’t seem to have much bearing on the ultimate plot and don’t really need to be there.

My biggest complaint was that either the rules for the world conveniently changed to get the characters out of tight spots, Deux Ex Machina-style, or else certain characters arbitrarily thrown into Aurelia’s path conveniently turned out to be exactly who they needed to be. It all started to feel a little contrived.

Still, I finished the story and enjoyed it. Even though this is listed as #1 in a series, the story ends, so I’m not sure if the rest of the series are just other stories involving different characters in the same world.

Violence: fantasy violence, but some. Not gratuitous