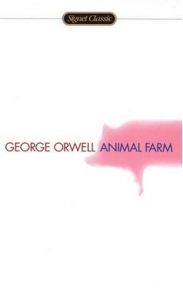 I last read this in high school, but then got it as a freebie on Audible. I was at first rather confused, as it seemed like a cautionary fable against socialism, and yet both the good and the bad characters appeared to be socialist. When I read commentary afterwards, this made sense: Orwell apparently was a socialist, but an idealistic one, like Lenin and Marx. In a perfect world, if humans were totally selfless, socialism might work great. Everyone would be looking out not for their own best interests, but those of everyone else. So in the beginning, the venerable pig Old Major rallies all the animals to revolt against their farmer Jones, so that they can keep the fruits of their own labor and govern themselves. The animals do revolt, and win, and for a brief period of time, there’s utopia. The pigs are the at first benevolent ruling class, natural rulers because they are so much cleverer than the other animals. They boil down “Animalism” to seven basic rules, which eventually get shortened into “four legs good, two legs bad.”

Alas, though, people (and in this case animals) are not perfect, and are not inherently selfless. So in the story, two pigs rise to power above all others: Napoleon (a type of Stalin), and Snowball (a type of Trotsky/Lenin). Napoleon eventually ousts Snowball, slowly turning the animals against him by subtly adding to the rules of Animalism that they all had previously accepted, and even changing history, making the animals question their own memories. Through repeated indoctrination and propaganda, most of the good-hearted animals come to believe Napoleon’s version of the world, despite their nagging doubts and evidence to the contrary.

Ultimately, the pigs break every one of the tenets of Animalism, walking on two legs after all, and becoming so human that it is impossible to tell the difference between them and the actual humans. The farm ends up worse off under Napoleon than it ever was under Jones.

Some aspects of the allegory can really only be understood in light of the Bolshevik revolution, and it’s not otherwise a perfect fable for other examples of the rise of socialism throughout history. But the very simple rendering of how propaganda can influence the the masses is especially chilling at the moment.

Political content: heavy but historical (though you can draw conclusions to the present day, clearly this was not the author’s intent)