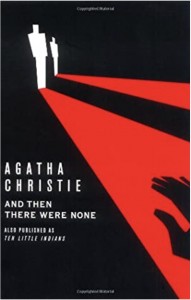 As murder mysteries go, this has to be one of the best. I guess that’s why it’s one of the top selling murder mysteries of all time. And what a title! Absolutely perfect, though I understand that until recent decades it was called “Ten Little Indians.” I see why, from the story, but that’s nowhere near as compelling.

The concept is a bit contrived and gimmicky, but that’s ok, since it’s set up from the get-go, so the reader can suspend her disbelief on just that one point. The story takes place on an isolated and sometimes impassable island of bare rock, with only one large manor house on the whole thing. It was once owned by a celebrity, so it was in the gossip columns before it was purchased by one U.N. Owen. This person, in writing, invited ten strangers to the island. Given the language of the letter sent to each and the intrigue of the place itself, they all came… but then the host was nowhere to be found. On the first night, a gramophone recording indicts all ten of them for a murder they committed, though each was done in such a way as to make it impossible for them to ever be convicted for it in a court of law. The place is called Soldier Island, and a centerpiece of the dining table downstairs shows ten little china Indians. In each room is printed the morbid Ten Little Indians poem, in which each Indian dies in a different way.

Then, the guests begin to die–and in ways that fit the poem perfectly. At first it might be accidental, but as soon as two of them have died, they realize it isn’t. They search the island thoroughly, realize that no one is there but themselves, and put together that U.N. Owen, the murderer, must in fact be one of them.

I read this aloud with my husband and we raced through it. Christie’s prose is very simple, her sentences short. She says only what needs to be said and not a bit more–there’s no flowery descriptions, and she saves any exposition of the characters’ back stories for when it absolutely needs to be told. I can see why she’s one of the best selling authors of all time.

Violence: present, but even though some were gruesome, they were “polite” as far as the description that made it on to the page