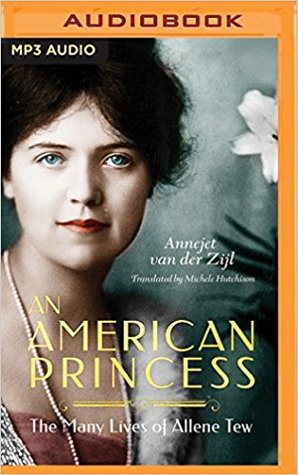 This is a biography, as the title suggests, of an historical figure I’d never heard of before, but who had apparently rubbed elbows with a number of illustrious people of her day. While the story reads very much like dry history, Allene undoubtedly had quite the colorful life.

Born in Jamestown in the late 1800s, Allene gained wealth and prestige through marriage: five of them, in total. Her first two husbands were ne’er-do-well gamblers, though she became a fabulously wealthy heiress from her first husband, by whom she also had three children. She buried all three of them in her youth, one of whom died in the first World War. Her third husband, Anson Wood Burchard, was the chairman of General Electric, and the love of her life. Then she buried him too.

But what stands out most about Allene’s character is her optimism and determination to make the best of whatever life threw at her. She became a princess in her 60s by her fourth husband, a German prince, who had been impoverished after the first World War and more or less went after her for her money. She knew this, too, but she may have hoped to act as mother to his two children. (One of the children allowed this, and the other did not.) Meanwhile, Prince Heinrich supported Hitler and attempted to get into the Nazi party’s good graces, but he was never important enough to warrant attention. Allene later divorced him, but remained close to his son Heinrich throughout the rest of her life, and considered him her own son, even leaving him a large portion of her estate. Also, through her connection to German aristocracy, Allene helped to arrange the marriage between German Prince Bernhard and Princess Juliana of the Netherlands–the latter had a very hard time finding suitors, because she was apparently quite plain and also extremely religious, so most suitors did not meet the standards of the family. The couple named Allene godmother to their daughter, Princess Beatrix.

Allene’s fifth and final husband was twelve years her junior (and with him she rubbed elbows with Edward VIII of England and Wallis Simpson, after the former’s abdication of the throne of England.) She was friends with President Eisenhower. When she died, Elizabeth Taylor was among those who expressed interest in purchasing her property (but she was refused, because her career was considered too “frivolous.”)

All in all, Allene’s life story is terribly sad (to consider what she lost), but it reads almost like a Who’s Who among the aristocracy of the day. I think the account of it suffered only from the narrative style: if it had read more like a novel, I think it would have been fantastic.