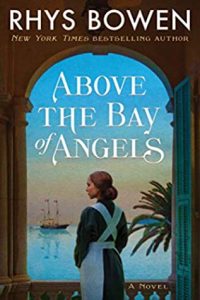 I love that I always know what I’m getting with a Rhys Bowen novel. They’re character-heavy slow boils, always set in Victorian England. The main character is usually obsessed with some kind of craft (herbs, gardening, cooking), and we’re treated to an in-depth description of her occupation, but it’s done in such a way that it’s thoroughly engaging. Then about 3/4 of the way through, there’s a “polite” (non-grisly) murder. We realize we’ve been set up for it for the entire novel thus far, speculating on motive and opportunity. Then, once our heroine solves the crime, she gets her happily-ever-after. It’s a formula, but it’s all done in such a charming way.

This time, the story follows formerly well-to-do Isabella, who falls on hard times due to her mother’s death and her father’s abandonment. She becomes a cook and a servant, to support her sister. But then her sister marries and Isabella can finally please herself. In a twist of fate, she has the opportunity to become one of the queen’s under-cooks, but only if she assumes the identity of Helen Barton, a girl whom she knows has died. She does so, though of course this provides a number of different kinds of conflict. While in the queen’s service, she travels to Nice, France, and trains under a master French chef who becomes her love interest. She ingratiates herself with Queen Victoria (and I love this about Bowen’s books: the queen is always portrayed as historically accurately as possible). Then, when a despised member of the German gentry ends up dead, they think from a poisonous mushroom, she as the chef becomes the prime suspect. She has to solve the crime to clear her name. This part of the story seemed very fast, but not too fast I guess. I was more interested in the episodic aspects of Bella’s life than the crime anyway.