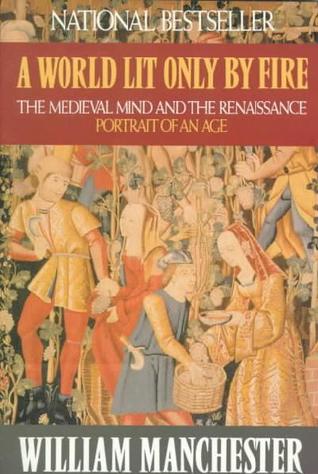 My husband and I read this aloud to one another, and man, it was a mouthful. Manchester writes beautiful prose, but in a very self-aware sort of a way. He often chooses incredibly convoluted turns of phrase to express simple ideas, compounded by casual references to obscure historical characters without context, unexplained jargon, or phrases in other languages without translation. A few times I caught myself thinking, I’m not dumb, so why can’t I figure out what the heck is going on? And then I realized, oh yeah. *That’s* why.

The first half of the book also revels in debauchery and violence, describing torture and orgies and what have you in gruesome detail. (I skipped over those parts when it was my turn to read aloud, but my husband read all of it when it was his turn, chuckling all the while. He finds the gratuitousness amusing… either that, or my reaction to it.) The book sort of leaves you with a sense that it’s a wonder anybody survived the Middle Ages at all. Since the average man was illiterate, it’s kind of amazing that mankind as a whole ever got out of the Dark Ages. And also, how in the world did Christianity make it to the modern era in any recognizable form when for like 1000 years, Church practices had absolutely nothing to do with the Bible? (I know the answer is God, but really, it’s quite miraculous.) Those poor people for those thousand years, though. Life in the Middle Ages really was nasty, brutish, and short.

I did find the portraits of a few notable people from the era fascinating though, particularly Martin Luther (what a firebrand that guy was!), Lucrezia Borgia, Erasmus (whom I thought kind of got a raw deal), and Magellan. And even though I was never 100% sure I followed any given sentence, the book still gave me an overview of the era.

Language: none that I can recall, except for a few colorful medieval insults hurled from Martin Luther at his opponents.