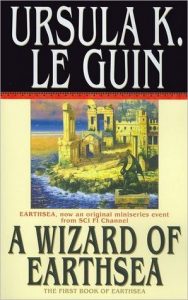 I remember that this book was recommended to me many years ago, before I really read much high fantasy. Now that I’ve been getting more into it, and it was on sale in Audible, I decided to give it another try, particularly when I read the synopsis that a wizard’s pride was his downfall. That seemed like a unique twist.

I actually was pretty into the story for the first half of it or so, even though the characterization was never particularly compelling (which is my usual complaint about high fantasy). Despite that, Ged’s single character trait of pride was still interesting enough, and his blunder of rending the tear between worlds as a result of this was extreme enough that I kept reading. Ged’s spell pulls a “shadow” from the other world, a nameless evil that nearly kills him.

After that, Ged is of course so humbled that for awhile he barely uses his power at all. When he does, it’s to seek out the shadow and expel it from Earthsea, or die trying. I think I lost interest in Ged once he was humbled, probably because that was his only unique character trait. The rest of the story was quite predictable.