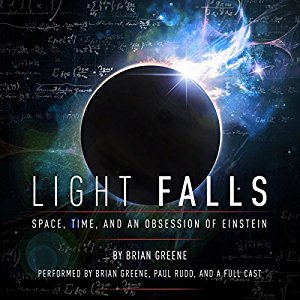 I generally don’t listen to non-fiction audiobooks, because I have a hard time absorbing the information. This book was an exception, mostly because it was on sale in Audible… but also because it was a dramatization of history more than anything else. Narrated by physicist Brian Greene (I’ve read other books he’s written, and they’re usually a lot heavier than this), it’s also “performed” by a full cast, with Paul Rudd playing Einstein and several other actors playing scientists with whom he worked and studied. I’ve read biographies of Einstein before, but this really brought it to life, and Greene manages to take very complex concepts and boil them down to their essence in word pictures. Not an easy task! For example: I knew that Einstein’s cosmological constant was a mathematical value he added in to his equations in order to render the universe static (which it wasn’t). I did not realize (though it retrospect I suppose it should have been obvious) that the “constant” was the exact amount necessary to cancel out the force of gravity. Later this inclusion was shown to be false–the universe is in fact expanding–and Einstein admitted that he was in error. (I’d also heard the apparent rumor that he’d called it the “biggest blunder of his life,” though apparently a reporter said this for him.)

You wouldn’t think the narrative of scientific discovery would necessarily seem gripping, but particularly because Greene manages to help the reader understand the nature of the quandaries with which Einstein was grappling, we can feel his frustration as he tries time and again to solve the problem. His moments of insight, and the triggers that led to them, help the reader to understand just how “outside the box” a thinker Einstein really was: for instance, the “happiest thought of his life” was the moment when he realized that if a man jumps off a roof, he will, during his descent, be weightless. This insight allowed Einstein to recognize that he could treat gravity as a kind of acceleration. He had no idea how to approach gravity as a heretofore unknown entity, but the equations for acceleration were well characterized and understood. Those equations allowed him to push past that particular road block in pursuit of General Relativity.

Most of Einstein’s discoveries came as flashes of insight, as he sat alone, pondering thought experiments. While the widely circulated tale that Einstein failed math is false (what actually happened was they changed the grading scales, but according to both scales he was at the top of the class), he did enlist the assistance of other scientists in mathematically describing his insights as equations. I also didn’t know that there was any debate that Einstein alone came up with General Relativity—but apparently David Hilbert (of Hilbert space fame) raced him to the finish line after Einstein explained the problem to him, actually publishing five days before Einstein did (though whether his insights were truly his own or borrowed from Einstein is unclear). Einstein was so nervous Hilbert would beat him that when Hilbert offered to have him over for dinner to explain what he’d come up with, Einstein wouldn’t go, for fear that he’d have to admit that after a decade of toil, he’d been “scooped” in the end. It humanizes him.

The book was quite short: probably only an hour or so, since the second half of it was an interview between Greene and Paul Rudd as they discussed Einstein. That was also entertaining, since Rudd asks the questions that any non-scientist might ask. It’s a nice blend of history and astrophysics, told in a way that most people will both understand and enjoy. Also: great title and cover!!!