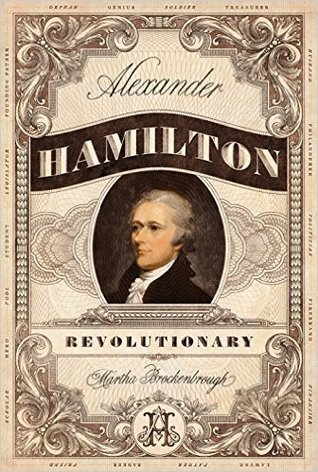 I picked up this book at the same time as I started listening to “Hamilton: An American Musical”, alternating between them so that I’d listen to the musical rendition of the history I’d just heard. And… wow. I wish I was a history teacher, just so I could assign my students to do the same thing. The book alone makes the story come alive, but adding the music gives it a much more powerful emotional punch.

Hamilton is one of America’s Founding Fathers that I really never knew much about before, probably because he was never a president—yet from the beginning, Hamilton’s greatest obsession was for honor and glory. Born a “bastard” at a time when such a label could scar a person for life, Hamilton’s early life was a string of misfortunes. The only reason he ever became noteworthy at all was because he became a published poet, and his orphaned and penniless status attracted public sympathies. Strangers sent him from his home in the Caribbean to college in New York, where he became a lawyer. His natural talents for speaking and writing later earned the attention of George Washington, with whom he had a complicated relationship. Washington never had children of his own, and Hamilton never had a father, nor any family to care for him. Washington thought of Hamilton as the son he’d never had, but his manner was so gruff that Hamilton apparently didn’t know it, at least during the Revolutionary War period. He persisted in calling Washington “Your Excellency,” growing resentful that Washington kept him at his side rather than allowing him to lead a battalion. Eventually this led to a falling out between the two men, and while Washington would have apologized immediately, Hamilton was too stubborn.

Years went by. Hamilton essentially created the American banking system while merely trying to help out his brother-in-law, and the documents he wrote on their operation were so good that nearly every other bank copied his plans. After the war was over, he realized that the loose Articles of Confederation—mostly an economic document—would not be enough to hold the colonies together. Along with John Jay and James Madison, Hamilton wrote the Federalist Papers, essentially birthing the Federalist Party and attempting to convince the nation that they required a strong central government in order to survive as a nation. From this, the Constitutional Convention followed—and when the new U.S. Constitution was finally ratified, parades in the streets called it Hamilton’s great achievement. His rift with Washington now mended, it was Hamilton who insisted that Washington alone must be the nation’s first president. Hamilton became one of his closest advisors, and Washington appointed Hamilton the nation’s first secretary of the treasury. Using the banks he’d helped create as templates, Hamilton created the first National Bank.

Given all of his accomplishments, his fame, his hunger for glory, and his close ties with Washington, the fact that Hamilton never became a president—never even ran for president—seems incredibly strange. But it can be explained by a single indiscretion: Mariah Reynolds. While Alexander always had a bit of a reputation with the ladies (he married Elizabeth Schuyler, but had a very flirty relationship with his sister-in-law Angelica too), he slept with Mariah while his wife and children were out of town. Then he received a blackmail letter from Mariah’s husband, demanding payment for his silence on the matter. Hamilton paid Reynolds, and he and Mariah continued their affair for some time. But the payments later came to the attention of Hamilton’s political enemies, who construed the payments as thinly veiled embezzlement from the government treasury. He was forced to explain the real situation. Hamilton never ran for president for fear that his affair would be publicly exposed, but his caution was all for naught in the end: it came out anyway. Rather than let it go quietly, Hamilton published a 95 page pamphlet, establishing that he had committed adultery, but not treason. Once again, Hamilton’s honor came first. But the pamphlet humiliated Eliza and his family, and did little to improve Hamilton’s reputation.

And what of Aaron Burr? The two men met in 1776, and led parallel lives in many ways. Both were orphans, both accomplished lawyers with high ambitions, and they even practiced law down the street from one another. Naturally, they found themselves frequent rivals. Burr was the quintessential politician in Hamilton’s eyes, never standing for anything except his own advancement. Burr ran for the New York senate against Hamilton’s father-in-law and won, positioning himself to later run for the presidency against Thomas Jefferson when it was clear that John Adams would not win re-election. The race between the two was deadlocked, but Hamilton’s public support may well have thrown the election to Jefferson in the end—a man who, until then, had been Hamilton’s bitter enemy. His denouncement of Burr precipitated Burr’s challenge to a duel. Even though Hamilton’s eldest son Phillip had already been killed in a duel (defending Hamilton’s honor), Hamilton accepted Burr’s challenge. Dueling was illegal in New York, so they had to cross state lines into New Jersey to do it. Hamilton had no intention of shooting to kill, but he knew Burr might not be so generous, so he spent his last few days outlining his will. He left his wife and remaining children destitute, unable to pay back his debts without resorting to charity. As a public servant, he’d never earned enough to support a wife and eight children. Still, he could not let a challenge go unanswered.

Hamilton probably should have been one of our first presidents, all things considered. He was brilliant, and in many respects he was a great man. Yet his obviously flawed worldview on the subject of his own honor dogged him throughout his life, and ultimately killed him. It was a tragedy, but a fascinating read nonetheless, made all the more compelling by the accompanying “soundtrack” of “Hamilton: An American Musical.”