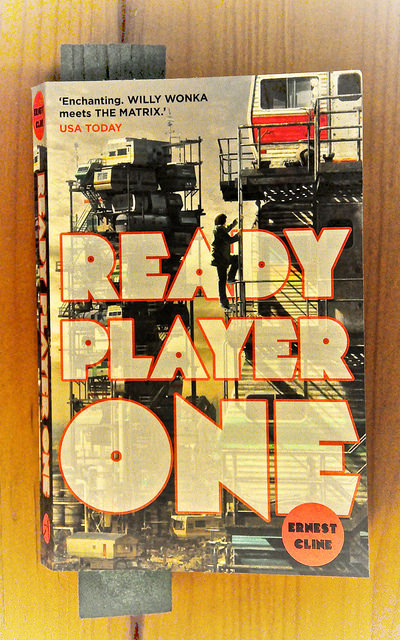 Audiobooks are my practical favorite fiction delivery method, even though I still have a soft spot in my heart for physical books. The fact is, I just don’t have time to read them. But I can listen to audiobooks when I’m driving, at the gym, and when I’m getting ready for work—so I can either consume a good book in anywhere from three days to a week, or determine quickly whether a less-than-stellar book just isn’t worth the time investment. I’m almost never listening to one at the same time as anyone else I know, though, and therefore I lack a community for discussion. So I finally realized I should blog about them, in the hopes that someone might chime in. 🙂

I raced through Ready Player One in probably five days. This is one of those unique stories that is clearly a labor of love; author Ernest Cline seemed to have combined all of his favorite things (video games, role playing games, 80s pop culture) into one outrageously imaginative quest. The premise: James Halliday, multi-billionaire and inventor of the massive online virtual reality world known as The OASIS, dies. But he leaves behind an “easter egg” somewhere in the OASIS, a buried treasure which will allow the finder to inherit his entire fortune. Halliday was a child of the 1980s, and obsessed with its popular culture—so any “gunter” (as the egg hunters come to call themselves) who wishes to find the egg must likewise immerse him or herself in 80s pop culture, including the video games from that era, in order to successfully follow the clues and clear the gates standing between the gunter and the egg.

The story’s main character is Wade Watts, but his avatar in the OASIS is Parzival, after Arthur’s knight who found the Holy Grail (though most versions spell his name as Percival. But I digress.) Parzival grew up in a trailer park with an abusive family, and was bullied in school, so when he has the chance to enroll in virtual school within the OASIS, he jumps at the chance. As far as he’s concerned, the less of his life he lives in the real world, the better. All of his virtual “friends” whom he meets along the way also hide various secrets behind their avatars, which I found to be an interesting commentary on the growing online culture. My biggest issue with the book was the author’s periodic political and religious soapbox, which he clearly placed in the mouth of his main character: there was a long drawn-out first person narration towards the beginning that I found off-putting. Those themes did recur a few more times, but they weren’t integral to the story, and were easily overlooked.

In many ways, the story is a classic quest tale where the characters have to puzzle out the clues in order to move forward, and this by itself would have made me love it. But the world building is so spectacular, the characterizations so rich, and the unique way the author ties in his own passions truly makes it a masterpiece. I can’t wait for the film!