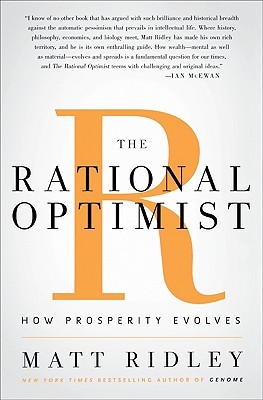 A little preface to my review: sometime last year, I finally figured out that, as I am not an auditory learner, it’s not a great idea for me to listen to non-fiction audiobooks if I want to retain anything I learn. Ebooks are best for non-fiction, because I can highlight them and then export my highlights, while audiobooks are best for fiction. I made an exception for The Rational Optimist only because Audible was having a two-for-one sale… but then I had to read the summary of the book on Blinkist (my new favorite app, by the way! It summarizes the key takeaways of non-fiction books so you get the bottom line but don’t have to read the whole thing) to make sure I’d gotten all the important bits.

The Rational Optimist argues—quite persuasively, I might add—that while it’s fashionable for the media to cover doom-and-gloom stories about how the world is headed to hell in a handbasket for any number of reasons, this is not consistent with the facts. The facts are that throughout history, humanity as a whole has become wealthier, happier, smarter, healthier, and longer-lived—and this holds true even for the poorest countries in the world. This trend shows no signs of stopping any time soon, either, largely because of the same economic arguments Adam Smith put forth in The Wealth of Nations: that is, our ancestors moved from self-sufficiency (doing everything themselves) to specialization and division of labor, which led to increased efficiency and a surplus of goods, which could then be traded in a free marketplace. The greater productivity becomes, the more wealth is created as a result of the surplus of goods to be traded. Trade also leads to increased trust (because after all, it’s in the merchant’s best interest to provide good products and services for the sake of his reputation in the marketplace), and a sharing of knowledge. It also means that some of the surplus can be reinvested in technology for the original business, further improving productivity—and the cycle continues. Sharing of knowledge, meanwhile, leads to innovation (after all, many heads are better than one: there’s a reason why the great advances in technology tend to occur in cities with a high population density), which enables humans to band together and solve problems that we collectively face. With example after historical example, author Matt Ridley paints a convincing picture that our plight is orders of magnitude better than our pastoral ancestors whom many of us idolize as examples of “the simple of life”—by any and every metric we can possibly choose.

Nor does he shy away from the more controversial aspects of commerce: Ridley even argues for the tremendous improvements in our lives since the discovery and exploitation of fossil fuel. It was this, more than all the political ideology, that made it economical to abolish slavery, as harnessing such energy sources dramatically increased productivity, and therefore, wealth. The environmental argument against fossil fuels, he argues, fails to account for the fact that the only way the climate could continue to rise as expected would be if the developing nations entered the world market on a grand scale, thus increasing their contribution to the worldwide fossil fuel consumption. While the climate may heat up as a result, these countries would be much wealthier and thus, far better able to withstand crisis than they are currently. (Or the climate may balance out, regardless: after all, he points out, during the time of the Roman Empire, the earth was hotter than it is now, and in the 1950s and 1960s, the fad topic was “global cooling.” Perhaps the earth, like the body’s bloodstream, has a built-in buffer system to account for these things.) Still, Ridley argues that as a result of continuing innovation, we’re burning less and less carbon over time as our energy utilization becomes increasingly efficient. So while the environmentalist interests attempt to lower carbon emissions by force or legislation, we are collectively doing this naturally anyway, as a result of the growth of prosperity, and the free flow of ideas. “Human progress has been driven by our desire to capture and use energy more efficiently.” The internet makes this process faster and more efficient than ever before. Despite all the doomsday reports that sell, the future is, and has always been, bright.

I absolutely love the dispassionate way that Ridley makes his points. There’s no rhetoric, no name-calling, and not even any clear partisanship. He just states his premise and then backs it up using a relentless stream of facts and examples. He did take on a few of my pet beliefs (GMO foods, for instance, or solvent exposure leading to diseases of affluence), and in those cases I could tell that he’d cherrypicked his examples. This made me wonder whether he might have done the same on subjects about which I had less of a foundation to contradict. Nevertheless, I thought he made a solid argument for a premise which (The Wealth of Nations aside) is largely original. Most non-fiction books make one or two points and the rest of the book is essentially filler; this one was absolutely worth a read from cover to cover.