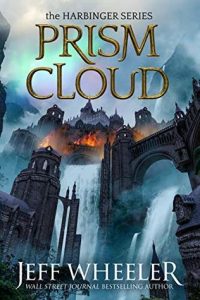 Sigh… I was afraid of this. If I kept reading, the happy ending from book 3 would be reversed, since it wasn’t the end of the series, and Jeff Wheeler doesn’t necessarily go for happily ever afters. This isn’t the end of the series either, and yet, now I’m afraid to read on. I might actually read spoiler reviews just to help me decide whether or not to waste my time and my emotional energy!

There were lots of curve balls in this one. (Skip to avoid spoilers, as I really don’t know how to review this book without spoilers.) Cettie learns that she is the natural daughter of Lady Corinne, which is quite predictable once one realizes that we’re reading a semi-retelling of “Bleak House.” Lady Corinne also brainwashes her to come over to the dark side more or less, which is the WORST. I understand that stories need tension, but there are certain kinds of tension that I just cannot abide. One is misunderstandings between characters that drive a wedge in otherwise good relationships. Another is deception causing a good character to turn bad. Only in this case, it’s not entirely clear that she’s gone bad… suddenly in this story, we’re led to believe that the Kishion and the Hatayra, both of whom had seemed unequivocally “evil” up until this point, perhaps aren’t as bad as they seemed. I can handle mitigating circumstances that lend sympathy to a villain, but not a complete reversal like this. Suddenly Cettie, who had been my favorite character and who started her early life completely alone, is again isolated from everyone who has ever loved her–but sort of by her own choice, even though it appears that she’s been deceived. She believes that the Knowing (essentially God in this story) has forsaken her, and so she chooses to side with what she once considered to be the enemy. I don’t know where Wheeler is going with this, but even if she comes to realize she was deceived, it seems she’s driven an irrevocable wedge between herself and everyone who loves her. And she actually told Adam she didn’t want to be with him anymore, after loving him all her life! I had worried that Adam would somehow end up with Anna after all, and now I’m pretty sure that’s where this is going. Cettie will end up alone. I HATE that, and I won’t read on if the reviews suggest to me that this is what happens.

Sera, meanwhile, finds her life in a complete reversal as well–but in a good way. At first I thought Cettie was set up to marry Sera’s true love instead, and if that happened I’d have stopped listening in the middle of the story. But fortunately at least that did not materialize! Sera gets everything she ever wanted, except not at all under the circumstances she wanted. She finds herself married to Trevon, and empress, but in the middle of a war with Kingfountain against her new husband. And Lady Corinne is behind it all.

I do want to see Lady Corinne get hers, but not enough to watch Cettie lose everything she’s ever loved. So I may or may not continue to read.