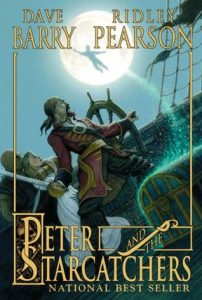 This was so much fun — I felt like I’d discovered another Harry Potter! Partly this was because it was narrated by Jim Dale, who also narrated the Harry Potter series.

Peter is an orphan, the head of a band of orphan boys, who finds himself aboard a ship called the Wasp where they are poorly treated. On accident, a suspiciously magical trunk gets loaded on to the ship: it has the ability to both make people and animals that touch it fly, and to suffuse them with a sense of golden well-being and joy. Peter comes across the trunk while scavenging food for his charges, and also encounters Molly, an upper class girl on board the same ship who seems to know more about the trunk than she’s letting on. The trunk turns out to be filled with “star stuff,” the stuff of all the magical legends and the explanation for every fantastical tale of sea monsters, mermaids, genius, and heinous evil throughout the ages. But unfortunately, a fearsome pirate known as Black ‘Stache knows of the star stuff too, and he’s after it. Peter, Molly, and Peter’s band of boys must make sure that the stuff does not fall into his hands. In the process of trying to keep it from him, they find themselves on a deserted island which, thanks to the star stuff, turns into “Neverland.”

The way in which all the elements of Peter Pan come to be in this origin story as so very creative–on a number of occasions I felt like there was a little wink-wink from the authors to readers in the know. The characters are lively, the story is engaging and funny at times, and the writing style held my interest throughout. I’m always a little sad at the end because Peter doesn’t age (that’s kind of his hallmark trait), which means he can’t have a traditional “happily ever after.” But this book is the first in a series, so I’m definitely looking forward to continuing it!