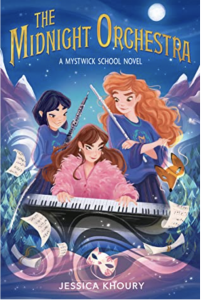 So fun! I’d read the first book in this series and enjoyed it, but then forgot about it until I saw it in part of the free books included with my audible membership this month. I’m glad I rediscovered it!

A lot of the middle-grade lighthearted writing style, the whimsy, and even the plot reminds me of Harry Potter. It’s music-craft instead of witchcraft, and the students use instruments instead of wands to work their magic. The main character, Amelia, has two sidekicks, Jai and Darby, and in this one there was even a “Malfoy” character, Mia. The teachers are quirky just like the Hogwarts professors, and some of the magical antics are just like the kinds found in the HP series. That’s part of what I loved about it, though I did think the plot itself was original. In the last book, we learned that Amelia was accepted to Mystwick on accident, having gotten the acceptance letter for another Amelia Jones who died in a tragic accident. In this one, we learn that she didn’t die–in fact, she shows up, goes by Mia (to avoid confusion), and claims her rightful place. She also is Amelia’s nemesis for apparently no good reason.

Meanwhile, Amelia gained the acceptance of the school when she composed a black magic spell in the last book to summon ghosts. During an episode of magical havoc at Mystwick, Amelia finds herself called to the Midnight Orchestra, an orchestra said to exist only in myth, and conducted by Mr. Midnight himself. He gives her a seed that will give her access to a powerful spell, but with the caveat that if she uses it, she will owe him a favor. She’s determined never to do so, but then when goaded by Mia and made to feel worthless, she does. Unfortunately, Mr. Midnight appears to claim his due–or else. At school, Amelia is one of few actual composers, and she’s gearing up for a school competition in which her team will perform the spell she got from Mr. Midnight’s seed. But when Mr. Midnight threatens Jai, Amelia has to choose what really matters, and face the demons of her own past in order to compose her way out of a seemingly impossible situation.

I love how the story manages to stay lighthearted the whole way through. Enemies become friends, good triumphs over evil, and Amelia manages to remain a good role model for kids.