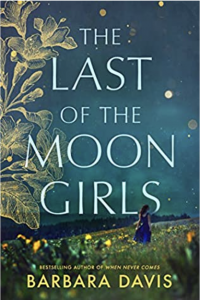 This seemed almost like a Rhys Bowen sort of novel: it’s a murder mystery, but with a lot of character development, artistic expression, subtle magic, and a love story thrown in. Somehow it wasn’t what I expected, but I really liked it.

Lizzy Moon has spent much of her young life trying to distance herself from her family: a legacy of women (exclusively) who lived on and managed Moon Girl Farm, an herb farm and apothecary where generations of magically gifted Moon women practiced herbalism. Of course this led the townspeople in their small town to consider them witches–and while they kind of embraced that term too, amongst themselves, to them it never had the “black magic” connotations that it did for the villagers. But it all exploded when two teenage girls’ bodies were found in the pond on Moon Girl Farm. Althea, Lizzy’s grandmother, was an easy target to blame, even though she had no motive and aside from the location of the bodies, there was no evidence to connect her to the crime. The town blamed her anyway, and even though the police had no case to bring charges, they stopped looking for the killer, effectively assuming that the crime was solved. As a result of the town turning on Althea, Lizzy’s flighty mother Ranna vanished without a trace, and Lizzy eventually left too. When Lizzy learns that Althea has died, she’s forced to go back, if only to sell the farm and set Althea’s affairs in order. But, Althea “knew” (in that way she knew things) that Lizzy would need some last guidance from the grandmother who had raised her. So in addition to the books each Moon girl kept through the ages documenting the use of her particular gift (analogous to spell books I guess), Lizzy also inherits a book written just to her. Throughout the story, as Lizzy faces one challenge after another, her grandmother seems to have anticipated it with a page from the book sharing just the right wisdom that she would need at that time.

Lizzy realizes that she owes it to her grandmother, as well as to the girls’ family and the girls themselves to find their killer at last. This stirs up old prejudices, but also paints a target on Lizzy’s back, with progressively more overt, anonymous threats to scare her off.

Meanwhile, Andrew, a boy whom she knew from school many years ago moved back in next door as a handyman, who had helped her grandma from time to time. She later learns he’s loved her for as long as he’s known her. But she has it in her mind that she can’t ever have a normal life, because the Moon girls have unusual powers, and because for generations they’ve only kept a man around long enough to conceive a daughter and then raising her alone (though there’s no reason for this–it’s just what they did). Lizzy is drawn to Andrew too, and her reasoning for keeping him at arm’s length just felt flimsy, like a device to maintain the romantic tension.

In the process of falling in love with Andrew and a touching reunion with her mother, who comes home in the midst of the murder investigation, of course Lizzy reconnects with her roots too, and “finds herself.” There’s a good nail-biting climax, and a satisfying resolution.

Language: I can’t recall, I think there is a bit, but not much

Violence: the prologue is quite grisly but that’s as bad as it gets. From there on it’s pretty tame for a murder mystery