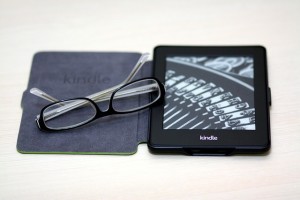 For months now, I’ve complained that my book sales have dropped off precipitously since the rollout of Kindle Unlimited—a subscription-based service in which Amazon will deliver unlimited e-books to subscribers for $9.99 per month. Apparently the Big Five publishers do not have books on the subscription plan, because enrollment requires an exclusive contract with Amazon. For that reason, the vast majority of the books on Kindle Unlimited are from indie authors.

After the launch, my daily sales nearly dried up altogether… even while I got tons of Kindle Edition Normalized Page Count (KENPC) reads per day. (This is the way they track how many “pages” subscribers read of my work, and I get paid based on the pages read. But the royalty calculations are extremely confusing, and appear to be something of a moving target.)

But this crazy calculation only applies indie authors, apparently. Traditionally published authors’ books enrolled in KU are paid the same amount as a sale for each borrow.

So almost immediately when I got the daily BookTrakr emails telling me I had zero sales but thousands of KENPCs daily (with no dollar amount connected to them), I pulled all my books off of Kindle Unlimited. I didn’t see my sales rebound after that, though… instead, I just saw the KENPCs fall off. (Yet somehow my books’ rankings on Amazon remained more or less the same… despite the fact that from my daily emails, it looked like no one was reading them. Can’t figure that one out.)

So finally I sat down and actually looked at my royalty payments. Prior to the rollout of Kindle Unlimited, I averaged about $328/month. Afterwards, I average about $127/month—and that’s despite the fact that I published “The Liberty Box” in October, so I had one more book to earn royalties than before. (However, I pulled my trilogy off of KU, and at this point only “The Liberty Box” is enrolled.)

There are a lot of variables to consider, too — like running Facebook and Amazon ads periodically, which always boosts sales. But all things considered, I’m pretty sure KU has hurt me substantially.

I’m not sure what the alternatives are, though. I did publish the first two of my trilogy, “Intangible” and “Invincible,” on Smashwords as well as Amazon, and have distribution through all the other e-book channels as well. But I’ve never sold much of anything through them, so that doesn’t seem to be much of a viable alternative. At this point I’m starting to wonder whether I should just put all my books on KU as an experiment, just to see what happens!