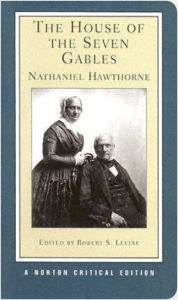 First: what a fabulous title! I don’t know what it is about it… so intriguing and mysterious.
This definitely isn’t the kind of story I would have picked up on my own, though. My husband read and loved it, but it’s a ghost story which isn’t my usual fare. When we traveled through Salem recently, we almost toured the House of the Seven Gables, though–and I thought I would read the book beforehand so that I’d have some context. We didn’t end up going and I didn’t get to the book until after we’d come back home anyway, but it was still October and a ghost story seemed appropriate, so I gave it a shot. Frank had warned me that it started off very slow, but the prose was so beautiful that somehow he didn’t mind. I felt the same way, though since a good half to 3/4 of the book was just character building, it did get a bit long even then.
The “prologue” begins at the time of the Salem Witch Trials, when one of the judges, Judge Pinchon, condemns one of the victims, Matthew Maule, because he covets his property. (This reminded me of King Ahab and Naboth’s vineyard in 1 Kings.) Just before he hangs, Maule pronounces a blood curse upon Pinchon and his entire family line, that he will “have blood to drink.” Later, the judge hires one of Maule’s relatives as his architect to construct the House of the Seven Gables on the Maule property, ironically enough… and no sooner is it finished, then the judge is found dead, having apparently very literally choked upon his own blood in a strange respiratory illness.
Fast-forward through the centuries to the last of the Pinchon line. Hepzibah and her brother Clifford are sympathetic and down-and-out characters, but their cousin Jeffrey is also a judge, and the spitting image of the one who condemned old Maule. Jeffrey sent Clifford to prison in order to protect himself from taking blame for a crime that he in fact committed, and all but destroyed Clifford’s sanity, while Jeffrey himself rose to prominence, wealth, and esteem. Meanwhile, another young cousin, Phoebe, comes to stay with Hepzibah and Clifford, and a daguerreotypist comes to visit as well, and tells Phoebe the history of the old home. He turns out to be a descendant of Maule, himself.
While there are no overt ghosts in the tale, the implication of a spiritual force of “karma” is strongly implied. The story is not so much grim as just atmospheric, and it does end happily, against all odds.
My rating: ****
Language: none
Sexual content: none
Violence: not exactly present, though there is a bit of gore
Political content: none (historical)