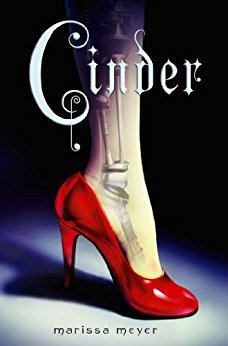 It’s my second time through the Lunar Chronicles, and I’m excited to re-experience it! This time I’m listening more like an author than a reader, considering each of Marissa Meyer’s choices. I think it’s ingenious that she interwove fairy tales into what was otherwise a wholly original plot in and of itself. It takes place in a futuristic, post-WWVI New Beijing, so there are a lot of Asian influences. Some “futuristic” aspects involve technology (Cinder, for instance, is a cyborg), but the whimsical narrative voice and the concept of a Lunar society makes it feel far more fantasy than sci-fi. Meyer borrowed some mythology of fairies for the Lunars, in that they can “glamour” people around them, bending them to their will–or merely changing their thoughts and perceptions. Oh, and there’s also a worldwide pandemic going on: the Letumosis plague, which (it turns out) was introduced to Earth by the Lunars. They are therefore immune, and use that as a political bargaining chip.

With all that going on, the addition of a fairy tale retelling hardly seems necessary… and yet, I LOVE that aspect. It takes what would otherwise be one more dystopian novel, and adds that much more romance–even though the actual romance between Cinder and Prince Kai gets very little “screen” time. Their chemistry is so fantastic, though! Cinder is not the beautiful servant, or at least we hear almost nothing about her beauty. She’s dirty and covered in grease stains, and Kai meets her like that–and doesn’t care. He’s lonely himself, since his father is dying of Letumosis, and he’ll soon be emperor, long before he’s ready. He’ll find himself attempting to manage a worldwide pandemic, and avert war with Luna if he can, even though Queen Levana of Luna’s terms for peace require a marriage alliance. With him. While I think it would stretch belief for a spoiled prince in peacetime to cast a lowly mechanic a second look (even if he doesn’t yet know she’s cyborg), in Kai’s position it makes sense. He needs a friend, a girl he can actually talk to, who doesn’t fall all over herself in his presence like all the rest. He’s not the pillar of strength that the prince in Cinderella stories usually is. He’s also a sympathetic character. You really root for both of them.

My one complaint is how horribly Cinder humiliates herself at the ball–and she *has* to, I get that. It just made me cringe! I don’t even think I could have stood to write that scene, in Meyer’s place.

I’m plowing through the rest of the series the second time around. If you haven’t already read this one, HIGHLY recommended!!!