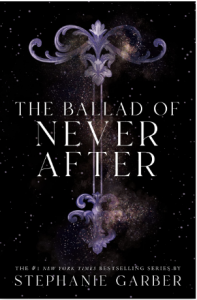 Ugh, what a let-down! And even so, I raced through it, so I feel like I have to give it at least three stars.

My general impression of Garber’s books is that they’re colorful and whimsical in the extreme, filled with lavish balls and gowns, and magic without rules or logic. The plots always revolve around a central romantic couple. This book certainly checked those boxes too, and the whimsy and creativity keeps me hooked, even though I did a lot of eye-rolling in this one too. The plot felt like it was flimsily strung between opportunities for titillating moments between Jacks and Evangeline, many of which felt contrived and also frustrating. Jacks was always 100% bad boy, with moments where Evangeline thought he might like her, only to then mock her the next minute. And yet she fell for him anyway–even though in the span of two books she’d been romantically tangled with two other characters and still turns her head every time a new handsome stranger enters the arena as well. She reminds me of Marianne from “Sense and Sensibility”–she’s all flighty sensibility and absolutely no sense. (I also kept thinking throughout this story of Jordan Peterson’s argument that women don’t fall for the “nice guy”–they want the proverbial Beast, whom they hope can be tamed. Jacks is a perfect example of this argument, as is the popularity of the series.)

Even still, because the prose is so magical, I might have given this finale four stars, except for the ending. I won’t even protest the fact that it made no sense… that’s kind of par for the course. But it wasn’t even emotionally satisfying. Granted, the ending we’re set up to desire wouldn’t have been logical, but so what? This entire series is an exercise in suspension of disbelief anyway, and besides, the ending we got instead also made no sense. So why not at least go for a happily ever after? Was it just so she could use the title, “The Ballad of Never After”? (Which, admittedly, is a great title.) I seriously suspect that was the whole reason.

Sexual content: no actual sex scenes, but the sexual innuendo is quite heavy

Violence: present but in a fantastical way