My Review of Atlas Shrugged: 5 stars 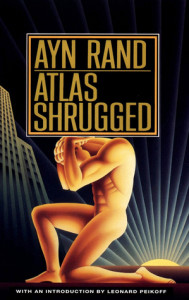 Disclaimer: I listened to an audiobook from the library that was super scratched up, so I had to skip good chunks of the earlier parts of it… and the last disc was missing! So I didn’t find out how it ended. Gotta pick it up and read the last few pages.

The foreword was interesting, because Ayn Rand specifically stated that she wasn’t interested in philosophy for philosophy’s sake; she was only interested in how it contributed to telling a good story. I thought that was odd, considering the whole book is a philosophical argument against socialism–fascinating to me because as I understand it, she lived in socialist Russia (though the book was set in 1920s United States). That perspective made me far more sympathetic to the aspects of the book that went against my personal beliefs. For instance, while I do believe that people should be rewarded for hard work and their contributions to society (capitalism), she takes it to the furthest possible extreme, suggesting that mercy and charity toward those who are less fortunate is actually immoral. She believes that one’s entire moral code should be based on one’s own achievements, pleasure, and happiness–even to the point of adultery for the sake of physical pleasure (and whoever happens to get hurt along the way be damned). But, considering the miserable and extreme context in which Ayn Rand was writing, I can sympathize with her inability to be (in my view) objective and reasonable with the circumstances in which caring for others actually is appropriate. People who have been oppressed tend to swing to the opposite extreme of whatever it is that they have experienced.

I loved the fact that the book made me think about the politics of our own times, and how they may relate to the fictional world she created. (We are headed into an increasingly socialist system, I think, and it is scary.) Her prose is absolutely gorgeous, and she is so good at causing the reader to feel the emotions she means to evoke, even if the reader (me) doesn’t actually agree with what she’s saying. That takes incredible talent.