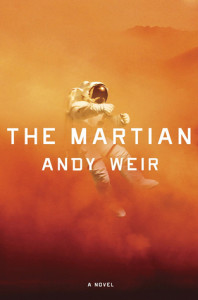 I seriously would give this book 6 stars if I could.

Picture MacGyver, stranded alone on Mars… except he’s snarky in a self-deprecating kind of way. He also uses the F-word all over the place, which ordinarily would put me off… but the way he uses language is so hilarious that in this case it doesn’t bother me. (And the fact that he manages to be hilarious in a believable way, given the drama of the situation, is impressive in itself.)

The main character, Mark Watney, is a botanist and an engineer. When his crew accidentally leaves him behind, he starts to write logs of his day-to-day experiences, most of which involve “sh*t that could kill him.” He pulls out all kinds of ingenious strategies, until eventually NASA (because it still existed when this book was written apparently) discovers that he’s still alive and manages to reinitiate contact. Together the engineers at NASA and Mark work to come up with a strategy to keep him alive until they can arrange for another mission to pick him up… but of course he loses contact with them again and he’s back to relying on himself (because that part is way more interesting for the reader.) The story goes back and forth between the people on earth, the crew that inadvertently abandoned him once they realize he’s still alive, and Mark’s log entries. Tension mounts as the people on earth know he’s in danger from satellite imagery, but they have no way to communicate this to him…

After a book filled with disaster-averted scenarios, I had no idea how the end of the book could be anything but anticlimactic, but Weir did not disappoint. The climax was so audacious that I wanted to cheer out loud (but I didn’t because I was listening to it on audiobook at the gym and that would have been weird.) I cannot WAIT for the movie!

Also, fun fact: “The Martian” was originally self-published, and got picked up later. Go Andy Weir!!!