My Review of “Making It On Broadway”: 4 Stars 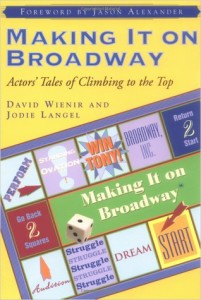 I went to see an absolutely incredible touring performance of “Newsies” that left me in tears. When I was in high school and even after, I used to think that my dream life would be to be on Broadway… only I didn’t have the guts (or the talent) to pursue it. So that night I googled the lives of the performers, wondering if it’s really as glamorous a lifestyle as it seems. What could be better than belting at the top of your lungs and doing backflips before a standing ovation in an enormous auditorium?

Most of what I found online didn’t seem to be particularly glowing — one performer, who had played Belle in “Beauty and the Beast,” said that her time on Broadway was fantastic, but it was also very difficult. They made little money, and had no time for anything else. Working conditions weren’t great either. She recommended this book, so that’s why I ordered it.

The book is a compilation of interviews with performers from Broadway and off Broadway shows, conducted by an entertainment lawyer and another former performer. And it’s shocking, and heartbreaking. While there is one chapter on dreams coming true, and how some of them made their way to the top, most of the book is about the uncertainty of the industry, never knowing when you’ll get cast again. Performers live in inhuman conditions in NYC, from places infested with rats to apartments formerly used for satanic rituals. Even the stages are dank and moldy backstage. Sometimes they put on makeup in tiny locker mirrors before their next appearances. It’s all but impossible to maintain relationships with non-theater people. And even those who are fortunate enough to get a long run of a show and thus maintain consistent employment say the glitz wears off, and eventually their “dream come true” becomes just a job.

Over and over again, the performers say, “It’s no life. If I could have done anything else at all, I would have.”

It was eye-opening to read, because in my ignorance, I’d always imagined that the life of a Broadway performer was the best I could possibly imagine. But it was also interesting that even those who achieved their dreams would eventually say, “It’s just a job.” I wonder if the same is true of Hollywood stars. Are all the glamorous positions in the world only impressive to those of us looking from the outside in?