My Review of “The Compound Effect: Jump-Start Your Income, Your Life, Your Success”: 5 Stars 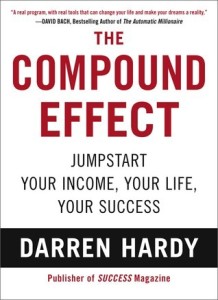 My mom loaned this book to me, as encouragement that small choices can add up to a big difference over time, whether for better or for worse.

Favorite illustration (which I will paraphrase and possibly get a few details wrong): three hypothetical men all start out more or less in the same place in their lives. All are married, have good but not great jobs, enough money but they’re not wealthy, in reasonably decent shape, but not athletes.

Then two of them make a small change. One decides to read self help books just a little bit each day. One decides to buy a big screen TV. And the third remains the same, changing nothing.

Over time, the three men continue to look and seem the same on the outside. But the one who bought the TV slowly begins spending a little more time in front of it than he used to. He installs a minibar next to it so that he can have an extra drink every now and then while he’s watching. He watches the Food Network more, and begins to develop the hobby of baking and making sweets for family and friends. He gains a little extra weight, and and the extra alcohol also interferes with his sleep. He starts to feel fatigued over time, gets more irritable, and takes it out on his wife. Maybe in six or nine months he looks just like the other guys, but in twelve to eighteen to twenty four, suddenly the difference becomes obvious. All from tiny changes compounded over time.

Then there’s the guy who changes nothing. Maybe he’s got things he’d like to improve upon, but because he doesn’t act upon them, twelve, eighteen, and twenty four months later, he’s in exactly the same spot.

The guy who reads the self-help books, however, starts to find that he’s more motivated, and begins to believe that he can be empowered to change his situation. He eliminates soda from his diet. Slowly he adds a few extra vegetables. Maybe he starts taking a walk in the evenings. Not enough to make a huge difference… but he finds he has more energy. He learns strategies about taking personal responsibility, and discovers that his marriage deepens and romance flourishes again. He starts to set goals for his career, and little by little he begins to spend time on them — maybe 30 minutes a day that he otherwise might have been watching a TV program. In twenty four months, he’s 30 lbs lighter than the guy who bought the big screen, he’s earned a promotion at work, and he’s happy and energized.

That’s the message of the book in a nutshell — there’s no instant gratification from making little changes for the better, but those little changes consistently applied over time will eventually yield big results.