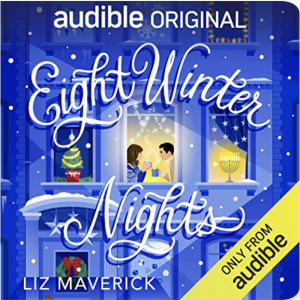 A fun chick lit holiday story, though definitely not what I’d call a “sweet” romance. It’s not terribly clean, though not overtly dirty either. At least it wasn’t objectionable enough that I stopped reading.

The story follows Rachel, a Jewish 20-something still living with her very Jewish family, who meets Oz at a Hanukkah party and falls in love at once. Unfortunately, she does everything with her gorgeous best friend Tamara, and once Tamara meets Oz, they hit it off too. Rachel steps back and lets her best friend get the man of her dreams, never telling anyone of her feelings for him–which develop into downright obsession over the subsequent year. A year later, Tamara breaks up with Oz and goes on vacation to Bali, right after Oz breaks his leg. Bizarrely, Tamara tells Rachel she wants her to stay with Oz to take care of him since he’s both injured and heartbroken. Oz, meanwhile, begs copywriter Rachel to help him write love letters to win Tamara back. Rachel draws on her own journals for source material, and feeds Oz the very things she wrote about him, to then send to Tamara. It’s a fairly contrived premise, but it almost doesn’t matter… what’s important is the emotional experience of the characters that follow.

At first I had a bit of a hard time with the idea of a romance where the guy is clearly still into someone else, and it’s a short book, so how exactly was this going to turn around this quickly? But by the time of the Hanukkah party that same year, Oz comes around and realizes that he’d been fooling himself about his own feelings all along. That also might be a bit contrived, but the way it happened in the story was still well done.

I do wish it was easier to find truly sweet romances that also aren’t cheesy, though. Seems that’s too much to ask.

Language: I think there was some, I didn’t keep track

Sexual content: not “on screen” but there were plenty of innuendoes and fantasies