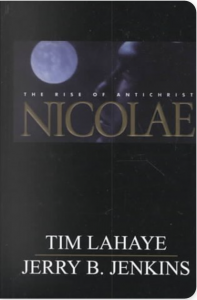 I’m so glad I continued the series!

This was the first one that I felt I could give an unqualified 5-stars. All the relationship crap was out of the way (usually I love romance, but it’s not these authors’ strong suit) and the annoying women didn’t really play a huge role, which was good. The male main characters, Rayford and Buck, carried the action. Rayford for unknown reasons was Carpathia’s choice as his pilot, placing him in position to hear all the Global Community’s behind-the-scenes plans, even though Carpathia knows that he’s a Christian. Finally, Carpathia puts the pregnant Hattie aside (about time, I thought, considering he’s the antichrist and the ruler of the known world–the idea that he’d be faithful to one woman defies belief), but he wants Rayford to do it for him. Hattie too knows that the relationship has soured, and contemplates abortion. Rayford and the Tribulation Force (Chloe, Buck, and the rest of their church) continue to try to share God’s love with her, and she wavers, having nowhere else to turn and no one else who loves her.

Meanwhile, Buck pulls off a daring rescue of the first of the 144,000 Jewish witnesses, Rabbi Ben-Judah. He’s been a marked man ever since declaring on worldwide television that Jesus is the Messiah, and his family was slaughtered. He’s devastated, and at first not a lot of help, but he rallies as miracle after miracle occurs to keep him safe (as of course they must, since he’s sealed by God).

The story ends with another of the predicted worldwide judgments, on a cliffhanger regarding the fates of many of the characters. Had to go straight on to the next one!

Violence: none (action that led to some violence but nothing gratuitous)