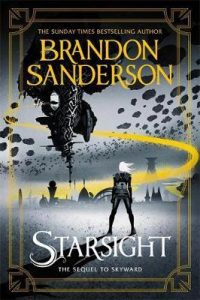 This story is an equally compelling read to the first in the series, but I still liked it slightly less for three main reasons: first, Spensa is the only character in the story really that carries over from the previous one, because she hyperjumps across space and meets a bunch of aliens. Second, while I buy that she’s super amazing and everything, she feels like a one woman show in this version (of course she does; she’s all alone, so everything relies upon her creativity, skill, and ingenuity). In the previous book, she was part of a team, which was both more believable and somehow more endearing. Third, while the ending was still a super spectacular awesome Spensa moment, somehow it couldn’t compete with the ending of the first book in the series — probably because in Skyward, everyone expected so little of her. Even she expected nothing of herself… but then circumstances pushed her to the brink of herself, and she had literally nothing to lose.

The plot: Spensa, on her home planet of Detritus, encounters an alien who was in route to Starsight, an alien civilization many light-years away from them. Because she can hear the Krell’s communications with one another in the “nowhere,” she learned in the climax of the last book that she can also transport herself in the nowhere, meaning that she and only she can hyperjump across space. She uses this, as well as a hologram from her super advanced space ship, to impersonate the alien who is back home in Detritus recovering. Her goal is to steal some of the alien hyperjump technology so that the rest of the humans can do what she does. They need to do it fast, so they can leave Detritus, since the Krell are threatening them with extinction.

Spensa infiltrates the alien political system, even to the point of training other pilots there whom she knows will eventually attack humans. Humans are universally hated on Starsight, believed to be excessively violent. In the course of the story, though, even as Spensa gets deep into alien politics, she realizes that the aliens are “people too,” and befriends them–all except the one other human among them, who ironically despises other humans and ultimately betrays her.

There were I think two or three very brief interludes back on Detritus also following Jorgan, the love interest from the first book. It seemed that the implication there was that Jorgan may also have the same “defect” that Spensa does. That hadn’t been set up earlier in the story that I can recall, though I assume it was mostly a setup for the next book in the series.