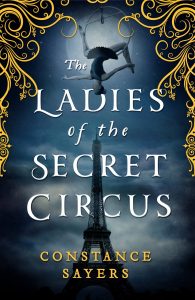 There is something intriguing and inherently magical about circuses, particularly in the 1920s.

The story follows Lara Barnes, opening on her wedding day to the boy whom she had loved all her life, even though he’d broken her heart a number of times. The intro was long and heart-tugging, so that you really felt her attachment… and thus her heartbreak when he appears to stand her up at the altar. His history of cheating on her makes it seem plausible that he really did just get cold feet… but the fact that he vanished without a trace, particularly leaving his car on the side of the road in the exact same place that an identical disappearance took place 30 years earlier, gives everyone pause.

Lara grieves, and eventually develops an emotional attachment to the town police chief Ben, in the process of the investigation. In time she becomes increasingly convinced that Todd didn’t leave her, but that something sinister happened to him. Add to this that there are hints throughout the early part of the story that both Lara and her mother, Audrey, have magical abilities–though Audrey frowns upon them and Lara uses them only for minor things due to Audrey’s discouragement. Audrey clearly has a secret that she’s not sharing. Lara also remembers meeting a strange man and a woman dressed in circus attire in childhood, and then runs into them again later on.

The story begins to unfold that the man is Alfa Kazur, one of the principle demons, who fathered a pair of twin girls, one of whom is Lara’s great grandmother. They were bound to a circus populated entirely by the damned, except for Alfa Kazur’s daughters, who were half human and who possessed great magic. Lara finds her great grandmother’s diaries which tell more about the dynamics of the family, and how this is related to Audrey’s secret. Through this, she learns what ultimately happened to Todd and to the other men who disappeared in the same place and in the same manner.

The supernatural becomes increasingly prominent as the story goes on, but in such a way that I didn’t find it jarring. I liked and identified with all of the characters I was supposed to. I did think some of the character motivations stretched belief from time to time, and some of the twists were a little too convenient. I knew I was in for a darker fantasy going in, but particularly in Lara’s great grandmother’s diaries, there was a lot of gratuitous sex. The whole book was also peppered with four letter words to the point where I nearly turned it off a number of times. I just persisted because it wasn’t constant, and I was just intrigued enough.

Violence: significant (and rather gruesome at the end)

Political content: present but only in one place that I can recall