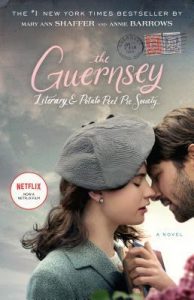 So cute! I’ve found I really enjoy WWII period pieces, and I also love stories that use the love of literature as part of the setting or motivation for characters to meet and bond with one another. This one has both, and a sweet Anne of Green Gables-style romance thrown in to boot.

The story follows Juliet, a 33-year old journalist and author who learns of how a small island named Guernsey managed to evade the occupying Germans by concocting a creative cover story for why they were out after curfew. They claimed they were a literary society… and later they also became the Literary and Potato Peel Pie Society because one of their members declared that a group couldn’t have regular meetings without snacks, but ingredients for an actual pie were too heavily rationed to be practical. She decides to write a book about the society, and begins a correspondence with its residents. The story is told entirely in letters, which is an interesting gimmick considering Juliet does actually go to Guernsey to meet them. While she’s there, though, the author gets around this by having her correspond with her literary agent and best friend back home about the people she meets there.

The group is very much like Avonlea, with busybodies and matrons and townsfolk that have become like family. Dorsey Adams is strong and silent, a shy farmer, though everyone seems to respect him deeply. Juliet is drawn to him right away, though there’s a wealthy handsome man back home named Mark who wants to marry her. She keeps him at arm’s length though, knowing that Mark would mean the end of all her independence. She meets and falls in love with a little girl named Kit who was orphaned in the war, and eventually decides she wants to adopt her. Juliet also learns about Kit’s mother Elizabeth, killed in a concentration camp, and decides that Elizabeth’s story will be the central theme of her book about Guernsey. As she learns more about Elizabeth, Kit’s German father Christian, and how central Elizabeth was to the rest of the members of the society, Juliet also finds that she becomes more and more a part of the group herself. Meanwhile, she falls in love with Dorsey and breaks off her engagement to Mark, but poor backward Dorsey has no idea how to court a city girl and spends much of the book with the distinct impression that she has feelings for her literary agent (who is gay, but he doesn’t know this.) The ending so satisfying. I watched the film version awhile ago but somehow remembered none of it… I might have to go watch it again.

Violence: none (aside from concentration camp descriptions but nothing gratuitous)