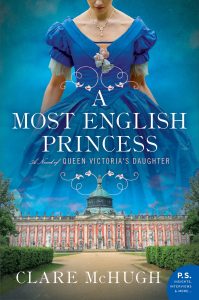 I absolutely loved “Victoria” by Daisy Goodwin, and I was really into the Amazon miniseries based upon that book as well. So when I saw that this one was recommended for fans of Goodwin, I decided to give it a shot.

What exactly was wrong with this book? I struggle to put my finger on it, but I think it comes down to the fact that I didn’t really like any of the characters except Prince Albert, Queen Victoria’s husband and Princess Vicky’s father. (Which is ironic, since in Goodwin’s “Victoria,” I was team Lord M, even though I knew the history of whom she actually married. The Amazon miniseries version of Albert was distasteful and unappealing, but McHugh’s is endearing.) McHugh’s version depicted Queen Victoria as exacting, and while she attempted to paint Princess Vicky’s marriage to Fritz, the crown prince of Prussia, as a happy one, Fritz’s character set my teeth on edge. He had his moments, but by and large I thought him an insensitive chauvinist (and I’m no feminist myself). I definitely did not appreciate the very detailed bedroom scenes either, and these did little to endear him to me.

As for Vicky herself… I identified with her well enough to finish the book, but there was something about her I did not respect, which increased as the book went on. She was excessively critical of her eldest son Willy (later Kaiser Wilhelm)–and while I think that the story intended to depict that the child simply had a bad disposition, and there was nothing she could do about it (which might have been true), it seemed to me that much of his character was a reaction against his mother’s disapproval. Later the epilogue, told from Wilhelm’s perspective during WWII, solidified this. Though Vicky seemed to be perpetually pregnant or nursing, she had a marked preference for their son Ziggy, which made me feel sorry for the rest of her children too. Then Ziggy died in childhood–and while I blamed Fritz for abandoning her in her grief, and Queen Victoria for admonishing her to get over him only a year later, she certainly became more shrewish after that.

Maybe what I liked so much more about “Victoria” was that it did not encompass the Queen’s entire life, but just her coming-of-age while wearing a crown. I found this fascinating, and it somehow lent itself much better to a novel. This one was very episodic, and I was apathetic about the characters at best.

Sexual content: gratuitous I thought, though in the context of marriage