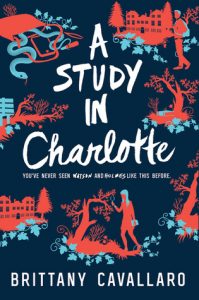 I absolutely loved this! I’m in some ways a big Sherlock Holmes fan (I loved the Cumberbatch version, and in general I love the characters of Holmes and Watson as portrayed in film, though I find the original Arthur Conan Doyle stories painfully dry). Rather than yet another retelling, though, this one had a very unique YA twist: in this world, Holmes, Watson, and Moriarty all married and had children many generations earlier, and now each have robust family trees who are quite familiar with the original stories (which, in this world, were actually written by Watson). Jamie Watson grew up hearing about Charlotte Holmes, the descendant nearest his own age, and spent much of his life fantasizing about what it would be like for the two of them to recreate the adventures of their forefathers together. By what seems to be happenstance at the time, he finds himself at an American boarding school with her. But she devastates his expectations when she appears to loathe him at first sight. There is only one person whom she loathes more than Jamie, though: a boy who attacks her honor, provoking Jamie to defend her. Then, he turns up dead–and the two of them are the prime suspects. So of course, they have to work together to solve the case.

I absolutely loved the dynamic between Holmes and Watson (as they call one another): it’s exactly what the original duo would have been, with sexual tension involved. Charlotte is just as compelling a character as Sherlock, and it’s only because we see her through Jamie’s eyes that all her sharp edges somehow become endearing. We love her because he loves her, though he never says it in so many words. It’s all the better because he doesn’t. The story takes another twist when the Moriartys enter in, as of course they must. There’s lots of intrigue, action and adventure, mystery, and a twisted coming-of-age romance that also happens to involve oxycontin addiction (on Holmes’s part). I probably would have taken issue with the way this is portrayed, except that it’s true to the original: Sherlock was supposed to have a drug problem too, which is quite believable given the extremes of his (and Charlotte’s) characters.

It’s rare that an e-book captures my attention enough to even finish it, let alone race through it as I did this one. It’s also rare that I’ll overlook the occasional f-bomb these days–I actually almost stopped reading early on because I thought the cussing would become intolerable. But it’s maybe one word every chapter or so, which I found I could more or less overlook. There are a few graphic sexual allusions too, but nothing that actually occurs on the pages of the story.

Sexual content: alluded to but not actually in the story

Violence: present but not over the top