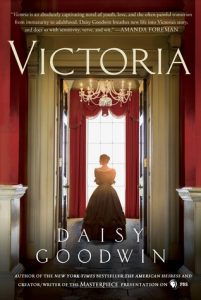 I LOVED this! It was almost like reading a Jane Austen novel, except the protagonist is the queen, and so all of the Victorian (no pun intended) rules are turned on their head. I definitely wonder how much of it is fact and how much fiction, because it reads exactly like a novel, though.

The story follows young Queen Victoria, from her girlhood initially to her early years as a reigning monarch, at a time when women have very little respect among the men of Parliament. She is a sheltered teenager with a complicated and codependent relationship with her mother. When her Prime Minister, Lord Melbourne, offers to be her personal secretary, she at first declines after hearing that he has a reputation as a womanizer. But she quickly learns that she cannot do without him, and changes her mind. What follows is their story, primarily. It’s an ill-fated love story, at least a told in this version, between a nineteen year old inexperienced queen and a fifty-something year old widower–and while that sounds super creepy without other facts, it’s just sweet and sad as Goodwin relates it.

Melbourne is a prince (figuratively), always preferring Victoria’s happiness and best interest to his own. Ultimately this is why he steps out of the way, to make way for Albert, who was to be her king consort. I had always heard that Victoria and Albert were a love match and that she adored him, despite all the rules that typically surround royal marriages, so it was a surprise that she had anyone else in her history. Had their age disparity been less than it was, I would have been sorry they didn’t end up together despite all the political ramifications that might have followed… but it is very clear that they were never meant to be. And somehow, though I hardly thought it possible, I actually was rooting for Albert at the end. Though I was sad for Melbourne.