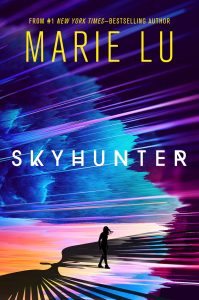 Marie Lu’s stories are always fast-paced action with fantastic characters, so they suck me in–yet I often don’t care for her endings. They tend to spoil all the enjoyment I’ve had up until that point. Skyhunter was a happy exception to this trend, though.

Talin is a striker without a voice, wh0 loses her Shield (her partner) early in the story and is haunted by his death. “Ghosts,” in this world, are more like zombies, and they are what the strikers are trained to fight against, though they also have human enemies. One such enemy, Red, is about to be publicly executed… but something about him reminds Talin of the Shield she lost. On the impulse of a moment, she decides to step in and speak for him, to beg for his life. The High Blade decides to punish her for her embarrassing interference by consigning him to become her new Shield instead. He is foreign, and he does not speak her language… and Talin speaks only sign language, so for quite awhile they have to communicate through an interpreter, which is unusual.

But then, suddenly, in the heat of sudden battle, Talin learns that Red has been turned into a war machine by their enemies: a Skyhunter, the first of his kind. (This part reminded me of X-Men.) He was designed to bond with his makers, but then suddenly he bonds with Talin instead. This forges a mind link between them, bypassing all of their cultural and language barriers in a moment. The sudden intimacy between them after this is of course predictable, but it doesn’t immediately turn into romance. I’m sure it will in the sequel, though, as it is pretty heavily foreshadowed in this one.

I’d love to go straight to the next book in the series (Marie Lu’s books always have this effect upon me, if she doesn’t completely lose me with her endings), but unfortunately it has yet to be released!

Violence: present but not excessive