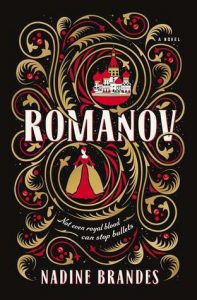 This story had one of the best relationships I’ve read in a long time!

I’m fascinated by the story of Anastasia Romanov, particularly since the musical “Anastasia” is one of my favorites (the music is just. Amazing.) I picked this one up on an Audible daily deal, since it was a retelling of Anastasia involving magic. Even better.

The story begins when the entire Romanov family is under house arrest by the Bolsheviks. I expected this to end quickly, and that Anastasia would somehow be on the run for the majority of the story–but that’s not how it turned out, rather to my dismay. The rest of her family was alive for about half the book, which upset me because they stuck around long enough for me to get attached to them, particularly to her brother Alexi, the crown prince. I knew they were going to die, so I was gritting my teeth in anticipation of this. But this extra time was necessary in order for the author to set up two Stockholm Syndrome-style romances: one between the ex-Princess Maria and the Bolshevik guard Ivan, and one between Anastasia and the guard Zash. The latter relationship was very interesting. At first it was a straightforward romance, aside from the star crossed lovers aspect. But later (semi-spoiler alert) it became far more about forgiveness and second chances than anything else. In fact, I felt like this turned out to be the theme of the whole story, as Anastasia prayed to Jesus (which I thought was interesting — were the Romanovs Christian, I wondered? Her papa, the Czar Nicolai, was portrayed as being very Christian), and as she grappled with her bitterness and her conflicting emotions toward Zash. Zash, meanwhile, struggled with his self-loathing. I wondered if the author was a Christian herself, and then at the end found out the book was published by Thomas Nelson, a Christian publisher. So that explains it!

I assumed the story would have to follow what we knew of history, aside from the addition of magic and the supernatural explanation for her survival, but (another spoiler alert), in this version, Alexi lives too. I suppose that’s not any more of a stretch than Anastasia’s survival, since there are reports that all of the Romanov bodies are accounted for, hers included. For the sake of the story, I’m very glad he did survive, since he was the one family member I couldn’t bear for her to lose. The ending was as much of a “happily ever after” as they could have, under the circumstances, which definitely made me happy!

Violence: none except the obvious (the family gets murdered) — but not gratuitous