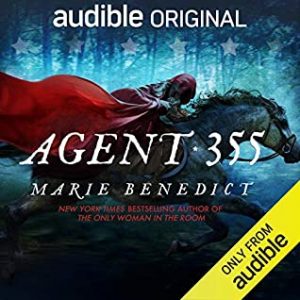 A quick, interesting listen made far more compelling because it is (loosely) based upon a true story! I loved the author’s note at the end.

The story follows Elizabeth, loosely based on a possible candidate for the Revolutionary Wartime spy, Agent 355 named Betty. She is a well-to-do daughter of loyalist parents, but on accident she meets up with a rebel named Robert who recruits her into a spy ring designed to leak intelligence of the British plans to General Washington. The real Agent 355 was involved in leaking the identity of the turncoat, Benedict Arnold, before he could take Westpoint which might have had grave consequences for the Americans. It’s a short story, so the inevitable romance between Robert and Elizabeth gets sped up to the point of being cheesy–but it really did have to happen, since the real Robert ends up with a son of his namesake just as Agent 355 vanishes from history.

The story doesn’t end happy, but it’s realistic, and a solid assumption of what likely happened in real life.

Violence: it’s pretty gruesome at the end but not in a gratuitous way

Sexual content: it’s on their wedding night and the story fades to black