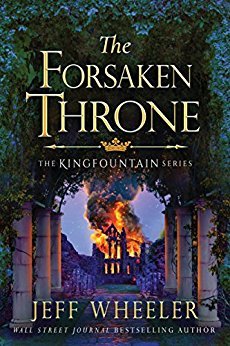 Finally!!! (Warning: major spoiler alerts ahead.) After an entire 6 book series, there’s finally what I’d call a TRUE happy ending. I’d almost say it’s happy to the point of being cheesy, and I might say that if I hadn’t just slogged through six books of some level of disappointment. As it is, I feel like we EARNED this.

The book opens right where we left off. Trynne has just married Gahalatine, though the marriage has not been consummated because she is underage and both her parents are still missing. Then he barges in to the Ring Table accusing her of treachery. She knows someone has impersonated her, but Gahalatine doesn’t know her and has been led to doubt her. Owen is still missing, his memories still gone. Fallon is heartbroken at having lost Trynne, but it seems he’s rebounding for Morwenna, which in turn breaks Trynne’s heart. Then Gahalatine loses his memories too, just as Owen lost his. They discover that the source of the lost memories belongs in another world. Trynne and Fallon end up journeying there together to try to restore what was lost… which raised my hopes. After all, yes, Trynne is married, but it hasn’t been consummated so there’s still a loophole maybe? And Fallon turns out to be less enamored of Morwenna than we’re led to believe.

In the last book, Trynne’s mother leaves her due to the Fountain calling her back to the Deep Fathoms, without explanation. She sails off into what sounds like a giant drain in the sea and that’s the last we’ve heard of her. Her little brother Gannon is murdered. She’s completely alone. Owen is not much part of the story anymore, off wandering in the other world, trying to remember who he is. Myrrdin left them at the Fountain’s bidding as well. Now, Morwenna is fully evil (she was teetering on the edge before) and impersonating Genevieve, trying to poison her and King Drew’s daughter and entice her half-brother Drew to go to war so that she can seize his throne. Drew, his mind muddled, turns against Trynne. Everything bad that can happen, seems to.

About two hours before the end of the book, after my hopes were raised that perhaps there was hope for Trynne and Fallon after all, they were dashed yet again. But I thought, that just seems cruel! I almost stopped reading and went to read reviews for the book to find out if it was redeemed in the end, but I’m glad I didn’t. Yes! Finally, a couple that should end up together, does, and without any treachery against Trynne’s “husband” Gahalatine or any fault of honor. Not only that, but we finally understand why Sinia had to sail away. She went to save Gannon, and returns with him from the Deep Fathoms! (I don’t really understand this part, but I’ll take it.) Owen gets his mind restored. Morwenna gets her just deserts. Myrrdin returns to help at the critical time. And the story ends on Trynne and Fallon’s wedding day. Satisfying at last!