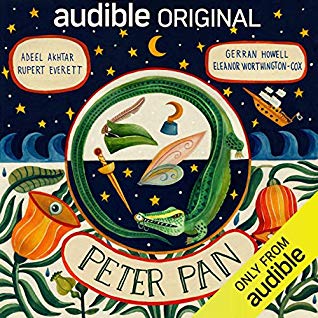 I can’t believe that I’d never actually read the original Peter Pan before! Such a delightful story, and a wonderful retelling, with a full cast and sound effects.

The British children (Wendy, John and Michael) during the WWII siege of London were reminiscent of the Chronicles of Narnia. That was apparently a very fertile time and place for children’s literature. Like the Penvensie children, the Darling’s mother Mary intended to send them to the countryside to get away from the bombing. Mary had told them stories all their growing-up years of Peter Pan, whom she had met as a girl and who had invited her to run away with him, but she had declined. This captured especially Wendy’s imagination, and she decided to write him a letter inviting him to visit her. Little did she know, he already came to visit her nightly. Instead of going to the countryside, they fly through the window to Neverland with Peter–despite the jealous Tinkerbell’s attempts to harm Wendy.

Once in Neverland, they meet the Lost Boys, who are so hungry for a mother that they decide that Wendy, herself a little girl, should become the mother they are missing. Peter is then appointed as their father, and while we never find out how old Wendy really is, it’s implied that she falls for Peter romantically. Peter, meanwhile, only thinks of her as a “dutiful son.” (Now I understand better where the term “Peter Pan Syndrome” comes from, for men who never want to grow up and are unwilling to commit!) The Lost Boys, Peter, Wendy, Michael, and John go on a number of adventures, interacting with the Lost Girls (led by Tiger Lily), the mermaids in the lagoon, and of course, Captain Hook and his pirates.

A story like this has an unresolvable conflict: the Darlings cannot both stay in Neverland and also return home to their frantic mother. And Peter, being Peter, cannot choose to return to the ordinary world where he no longer belongs, no matter how he might feel about Wendy (and it’s sort of implied that he has feelings for her too, though he doesn’t seem to know it). So the ending is bittersweet. But as children’s books don’t include a great deal of introspection, the sadness is minimized. It’s mostly just a fun, lighthearted adventure.