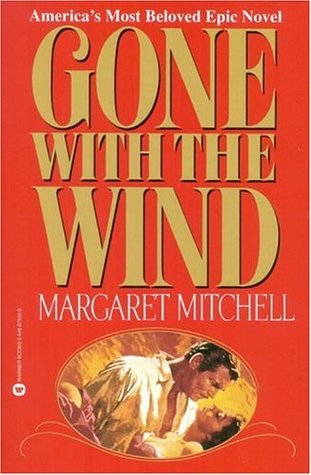 Wow. This second time through I gritted my teeth from the moment Scarlett tells Rhett that she doesn’t want any more children until the end, anticipating all the awful things to come. I would never have suffered through the vicarious misery a second time if not for the sequel, “Scarlett,” which redeems all and which I plan to reread immediately for its satisfactory closure! But a few things I noticed this time that I did not notice the first:

First, Melanie is such an enormous character. I don’t think I fully appreciated how pivotal she is the first time through in Scarlett’s overall life and (in this book) in her too-late transformation, but she really is. She’s a caricature of goodness, and yet she has a quiet strength that makes her so much more admirable a character. She’s a perfect foil to Scarlett, and she’s so necessary to Scarlett’s ultimate self-awareness at the end.

Second, I’m a little surprised this book hasn’t been banned in schools considering how negatively blacks are (in some cases) portrayed in the story. But I guess it was never required reading when I was in school (much, much too long I imagine!) so it probably isn’t now. But it does paint such a complex picture of the political world in which Scarlett lived, not just in the Civil War but especially in the Reconstruction. There are such nuances between what are now stark delineations of good and evil. You can really see how both sides came to believe what they did.

Third: while I utterly despise heartbreaking endings like this one, I also see that Mitchell could not possibly have ended it any other way and maintained its enduring power. I think the very reason why it is so haunting is because it’s a cautionary tale. Scarlett is a scoundrel, though because we’re in her head, we can see why she does what she does, and empathize with her most dastardly deeds, even if we can’t actually root for them. I also see this time through that she isn’t entirely to blame. She and Rhett share many of the same follies, which is the other side of the coin that makes them so perfect for each other. He might have had her toward the end, if he hadn’t been so fearful of her rejection and clung so selfishly to his pride to protect himself from the possibility of it. She might have had him toward the end, if she hadn’t behaved in exactly the same way. Even before Rhett spoke the line, I kept wanting to shake Scarlett and tell her, “Can’t you see that you’re throwing away your happiness with both hands?” But until the end, every time Rhett tells Scarlett he loves her, he does it such in a mocking way that she never believes him. She’s too self-involved to see that he actually means it.

I am so glad, though, that Mitchell’s last few lines leaves open the possibility of a reconciliation with Rhett, and I even think she intended for the readers to assume that at some point she does get him back. After writing a thousand-page epic, she probably felt that there was no more poignant place to end the story than where she did. Had she kept going, it would have been anticlimactic, and would have nullified the very powerful cautionary moral of the story: Scarlett at last reaps what she deserves. Even so, for us romantics , I’m so grateful that someone saw fit to write a sequel once the copyright expired (which I assume is why it took so long!)

Oh! Gut wrenching!!! My good friend warned me that I would grieve when it was over, and I read it anyway… and while on one hand I wish I’d heeded her warning, on the other, it is such a great story that it’s worth it. The characters are incredible, and although the love story actually gets very little “screen time” for a 1000+ page novel, it’s the underpinnings for everything they do. All of the history and politics of the time are also quite relevant, so it’s educational as well. But at bottom, it’s a morality tale. Both Scarlett and Rhett are morally bankrupt, and so they do what they must do, and you watch it destroy their lives… and yet you root for them anyway, knowing that Margaret Mitchell could have written it no differently without changing them into different people.

I have hope, and choose to believe, that once Scarlett becomes a decent person (which she FINALLY does), she will have the wherewithal to turn her life around!

Political Content: quite a bit, in fact there’s more about the war and Reconstruction than about Scarlett and Rhett’s relationship, but it’s historical of course.

Sexual Content: present but in marriage and tastefully done

Language: I’m sure it was quite shocking for the 1930s but very mild by today’s standards