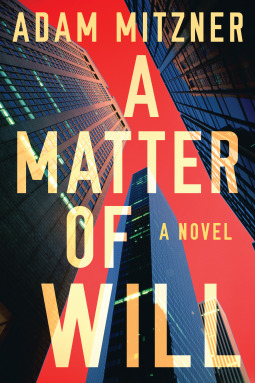 I was very pleasantly surprised by this one! It’s not my usual genre, in part because thrillers like this are often also full of violence, language, and sexual content that causes me to put it down early on (or never pick it up at all.) I only downloaded this one because it was one of Audible’s Daily Deals, and I expected something supernatural from it, due to what appears to be the primary antagonist’s name: Sam Abaddon. (Abaddon is also the destroying angel in the book of Revelation, so I thought he might turn out to be the devil incarnate or something.) While that didn’t happen, Sam’s character was so intriguing to me that I overlooked the language (which was not at all as heavy as I’d have expected for a thriller) and the one descriptive sexual encounter in the book.

The story follows Will Matthews, an optimistic late-20-something to the point of naïveté who works at an investment firm. He meets Sam and his stunningly gorgeous girlfriend Eve at a hockey game. Sam is clearly in the top 1%, and for reasons that are never quite clear to Will, he takes him under his wing, allowing him to become his personal investment banker–for millions of dollars. (This part of the story also intrigued me because I know next to nothing about the world of Wallstreet, so it was educational as well. The author either has first-hand experience, or did a lot of research.) At this point the story sounded a lot like the true “Billion Dollar Whale” story, of convoluted shell companies created for the purpose of laundering enormous sums of money. Meanwhile, Will dates and falls in love with Gwen, an up-and-coming attorney assigned to a high profile murder case. Here too I was impressed with the insights into the world of litigation–the author again either had firsthand knowledge or did his homework. Gwen is the more skeptical of the two, and warns Will on several occasions as his ties to Sam grow deeper and more binding. Will doesn’t listen–until it’s too late.

What really surprised me, though, was the way in which Will discovered it was “too late.” I really didn’t see it coming at all. A major twist shows up about halfway through the story, and from there we get to experience all of Will’s revelations along with him. Perhaps I should have guessed, but when I’m engrossed in a story I don’t even try because it’s more fun to be surprised!

Very engrossing tale, with a satisfying ending. I tore through it in a few days!

Language: there is some but not as much as you might expect for a story like this

Violence: present but it’s pretty much gunshots and stabbing, and there isn’t a lot of gratuitous gore. It just states it and moves on