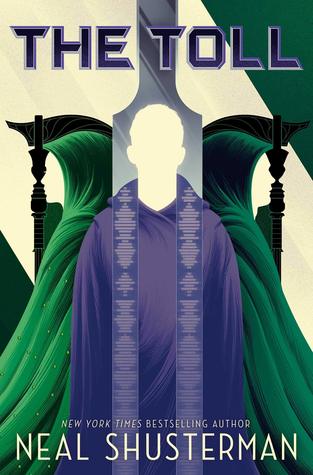 I was so excited about the release of this book, because I absolutely LOVED Scythe and Thunderhead. I had high expectations, which might be part of the reason for my disappointment. But I was disappointed, for several reasons.

First, while Scythe followed Rowan and Citra almost exclusively, and Thunderhead followed them and also introduced Grayson, The Toll was all over the place in terms of characters. There were several new characters introduced whom I never had a chance to care about because we didn’t stick with any one perspective long enough. Citra and Rowan didn’t even come into the story until like 4 hours in. While the scope of the plot was always worldwide, in the other two books we got to experience worldwide events as they affected one character (or a few) with whom we could identify. In this one, though, it felt like we were observing the whole thing from 30,000 feet. It’s like the difference between reading statistics about a disaster, versus hearing an individual’s story that tugs on your heartstrings.

Second, it had been long enough since I read Thunderhead that I forgot how certain characters came to be where they were… and if The Toll does refresh the reader’s memory on this, I missed it. This might be my fault, because I was listening to the audio version, so maybe I wasn’t paying attention to every detail. But it required suspension of disbelief on a number of points because I couldn’t recall why things were the way they were. Some of the events that occurred in The Toll also didn’t make a lot of logical sense to me. They just seemed convenient plot devices to keep the story moving.

Third, there was a very clear political agenda, it seemed to me. The author’s views about the way society should be (from a particular political viewpoint) played heavily into the story, and was painted in a soft romantic light. This made me feel like I was being emotionally manipulated to agree with him.

For all that, I did still enjoy the story. I was fully engaged at least in the parts where Citra/Scythe Anastasia and Rowan were together or searching for each other. I still loved the character of the Thunderhead –in many ways, its character seemed like God to me. (I disliked some aspects of the ending, mostly because the Thunderhead was my favorite character.) But it’s hard to know how to wrap up a story like this one. The overall plot is still incredibly creative and unique. I just wish I could recommend the first two books in this series without necessarily recommending the third. But Thunderhead ends on a cliffhanger more or less, so it doesn’t really leave that option.

Language: there was some but it wasn’t overwhelming. Barely registered for me.

Sexual content: none that I recall. There was some that was implied though.

Violence: it was there but I didn’t think it was over the top.

Political content: this was the worst of it for me, by far. It was bad enough that I’d probably have stopped reading it, had it not taken about 2/3 of the book to become really overt, and by that point I kept thinking he’d made his point and would now leave well enough alone and get on with the story. But… no. He didn’t. It’s that way until the end.